The hosts of Halkbank ANKARA can barely wait for the Final Four weekend where they will be trying to turn into the first men’s team from Turkey to win the CEV DenizBank Volleyball Champions League. 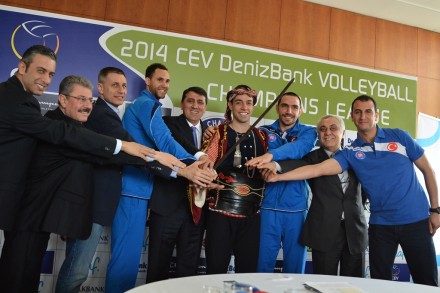 “As usual, I feel honored with competing in the Final Four of the CEV DenizBank Volleyball Champions League,” commented  Halkbank head coach Radostin Stoytchev. “I am very happy that this tournament is taking place here in Ankara. We will play some of the best teams in Europe. Our mission is very important for the future of Halkbank as well as for men’s Volleyball here in Turkey. The coaching staff and the players are all well ready for the matches coming up this weekend. The team that will be fighting and remains focused until the end will win the tournament. We first have to concentrate on the semi-final and once we are through, we will devote our attention to the final match.”

“Last year we already wrote history for Turkish Volleyball by winning the CEV Volleyball Cup for the first time,” stressed Can Ayvazoglu. “Our only goal now is to win the trophy of the CEV DenizBank Volleyball Champions League. Our sight is set only and exclusively on this goal. I invite all Volleyball fans to come and support us.”
“We will play against the best teams in the world,” added Cuban-born Osmany Juantorena. “The Russian teams are particularly strong and have excellent players. It is very important for us to win the semi-final and make it to the gold medal match.”
Halkbank setter Raphael Vieira de Oliveira attracted much attention from the media as he showed up dressed like a seymen, a member of a traditional militia from Central Anatolia: “I am not Turkish but I am really happy with competing for a Turkish team,” he said. “I can only promise that we will be doing our best to win the cup.”
The Final Four weekend will start on Saturday afternoon at 2 pm local time with the first semi-final starring  Belogorie BELGOROD and Zenit KAZAN for an all-Russian derby. The hosts of  Halkbank ANKARAwill then play the second semi-final at 5 pm local time taking on Poland’s JASTRZEBSKI Wegiel. After transferring world-class players such as Matey Kaziyski, Raphael Vieira de Oliveira and Osmany Juantorena,  Halkbank want to seize the day and become Turkey’s first team to win Europe’s elite club competition.
Visit also the official website http://www.finalfourmen2014-ankara.com/en