A media event was organised on Tuesday by Turkey’s giants Fenerbahce Grundig ISTANBUL shortly before the departure of their team to Romania where they will contest their first match in this year’s CEV DenizBank Volleyball Champions League playing local heroines Stiinta BACAU on Thursday. 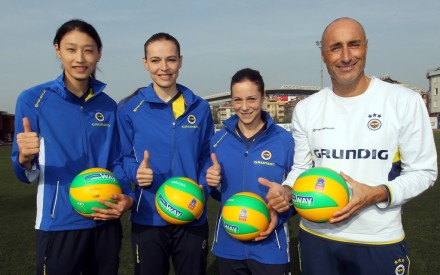 “This competition is joined by a lot of strong teams and you always get the chance to watch Volleyball at its very best in the CEV Volleyball Champions League,” said team captain Eda Erdem Dündar. “We won this competition back in 2012 and of course we would like to repeat that same feat. It is going to be a long campaign, some kind of a marathon. The other teams representing Turkey in this competition are very good too. We did not play in the Champions League for two years and we have been missing it very much. I hope that this season we can at least make the Final Four tournament.”

Korean superstar Kim Yeon-Koung – who was the MVP of the 2012 Finals in Baku won by Fenerbahce – added: “I am very excited to play again in the CEV Volleyball Champions League. I am confident that we will be successful this season. I will play my best in order to help the team achieve this goal.”

Italy’s setter Eleonora Lo Bianco – who moved to Fenerbahce after spending two seasons with their arch-rivals Galatasaray Daikin – added: “I am very happy to play in this competition and to do so wearing the shirt of Fenerbahce. We have many new players, including myself, so we are improving our team chemistry day after day. Every single team participating in the CEV Volleyball Champions League is of the highest calibre. We know that Stiinta BACAU, our first opponent, have a good team: they especially play good in attack and they also block very well.”

Head coach Marcello Abbondanza concluded: “This season our goal is to play the Final Four tournament of the CEV Volleyball Champions League. We have finalised some transfers and the team is getting better day by day. We will be playing our first match in Romania and we want to start with a victory.”