Turkey, starting only their second ever FIVB World Grand Prix campaign, carried on where they left off in their successful Olympic qualification by beating Japan for the first time in their history in the opening match in Pool C. 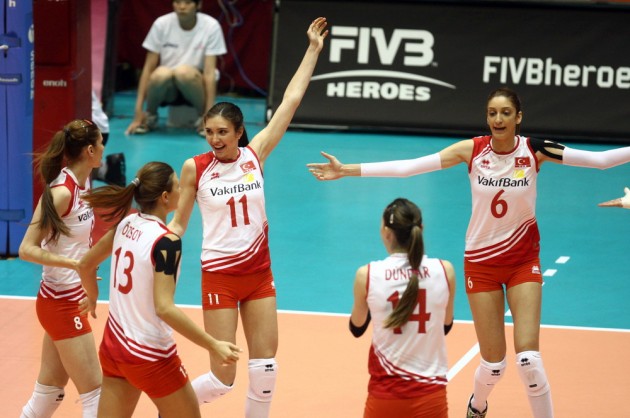 The 3-0 (25-19, 25-21, 25-21) win for coach Marco Aurelio Motta and his team was inspired by skipper Gozde Sonsirma, who led the scoring for Turkey with 14 points, although Japan‘s Saori Sakoda finished overall top scorer with 15.

High blocking and strong serving were the keys to Turkey’s success in the opening set, Eda Erdem combining well with Sonsirma to create a stable platform for the European team. Japan struggled in receiving and that, plus Turkey’s lack of unforced errors, meant they were never really able to get going.

Polen Uslupehlivan, who finished with 11 points for the winners, came to the fore in the second set, scoring heavily with swift attacks from both right and centre.  Japan, meanwhile, were still having problems in defence. Their set plays were not enough to make up for it, and last year’s fifth-placed finishers soon found themselves staring down the barrel, two sets down.

Japan changed things around for the start of the third set, introducing both Risa Shinnabe and Ai Otomo to their starting lineup. For a while it had an effect as Otomo’s speed and agility put Turkey on the back foot and enabled Sakoda to score more freely. But Turkey were determined not to be taken to a fourth set. Sonsirma re-asserted herself while Neriman Ozsoy began to score heavily, and in the end it was all too much for Japan.

Tomorrow Turkey take on hosts Korea in what promises to be a close-fought affair, while Japan will be looking to bounce back against Cuba.