The audience screams and call after the two mascots when they enter the court dancing. The players want to be photographed with them. No doubt that these volleyball mascots Vabo Chan and Volley- Boo are a huge success story. 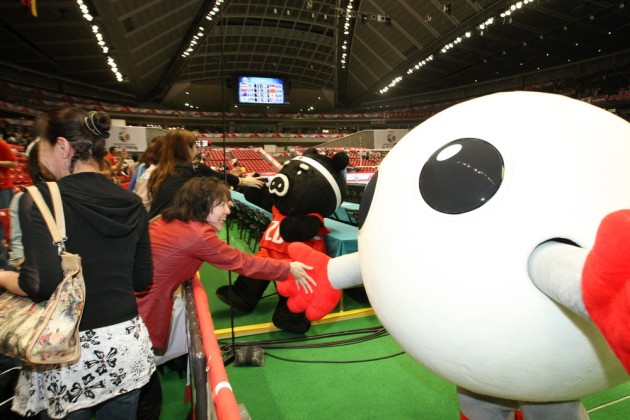 The famous Vabo Chan was one of the first event characters ever created in any sports. The round and friendly looking Vabo Chan was initiated by the Fuji television Network Incorporation in 1977 in order to cheer up the audience at World Cup in Volleyball that year. Vabo Chan was designed by the celebrity illustrator from Japan, Mr Tajima.

“It was a challenge for me to create a character like this. I was sleepless for three nights. How do I make a ball human?” he said in an early interview when the success was a fact. Since then the Vabo Chan is an institution that has seen many Volleyball stars rise and fall during the years.

“Vabo Chan is a very important mascot for us as a TV-company. The kids love him. He is immediately identified by them as a Volleyball character that means big competitions like World Championships, Grand Prix or this FIVB Men´s World Olympic Qualification Tournament,” said Mihoko Sato production manager at Fuji TV, one of the two right holders at this event.

“Since 1977 we have updated him a little bit to take him in to the future of Volleyball. Now he comes in five different colors, and pink is the most popular, “ she said.

At 1998 at the World Championships in Tokyo Vabo Chan was accompanied by the red and black character Volley- Boo. Initiated by the second right holding television company at this tournament, TBS. The two characters are a rich source for Fuji TV and with all these additionally merchandises as T-shirts, key holders and stickers that comes with the two characters.

” We immediately saw the potential in Volley -Boo as a image holder to promote the sport so now we have six other Boos entering other events like Tennis-Boo and so on. But Volley -Boo was the first.”,  Naoki Hashimoro, TV director for TBS said.

And maybe the best thing of all. Vabo Chan and Volley Boo are best friends confirms Naoki Hashimoro and Mihoko Sato smiling.

TBS has 80-100 depending on match and on top of that 276 accredited journalists are covering the event.