Shameful scenes at the big Istanbul derby between Galatasaray and Fenerbahce... 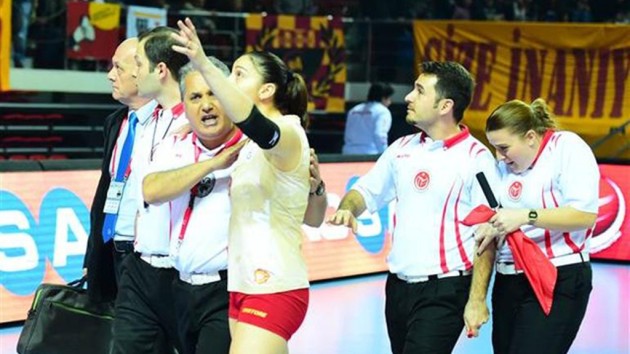 Players of Galatasaray had to protect referees from their fans! Nihan Guneyligil literally covered the main referee with her body in order to prevent Galatasaray fans from hitting him with various objects!!! Scenes that we could not imagine that could happen in volleyball…

It has all started in the third set when Fenerbahce had the lead of 2-0 and 8:7. The main referee gave that 8th point to Fenerbahce after he thought that one player of Galatasaray made a net violation… That call started everything. Players and coaching staff of Galatasaray loudly protested, while home fans started throwing objects on the court and chanting abusive slogans. The main referee had no choice than to suspend the game for a while.

During that pause, Galatasaray fans even climbed on the ceiling of the Hall and removed the flag of Fenerbahce!

After a 20-minute break, the game continued and Fenerbahce defeated Galatasaray by 3-0.

One of Galatasaray director stated after the match that Galatasaray did not want this referee due to the fact that he used 4 red cards to Galatasaray team in an away loss to men match against Inegol Belediyespor in addition to not requesting a single announcement to local fans chanting abusive and insulting words against Galatasaray. He added that we knew that this referee would do anything possible against us and he just did it. This is just the explanation of the anger of the fans. This does not change the fact that Fenerbahce woman team has more quality players and is currently playing better than Galatasaray. Congrats to them.

Normal situation when Galatasaray and Fenerbahce teams play! Same wild people in Greece… This are not volleyball fans!