The career of Rebecca Perry, the U.S. Women’s volleyball player, is one of the most interesting in terms of currently active players involved in this sport. 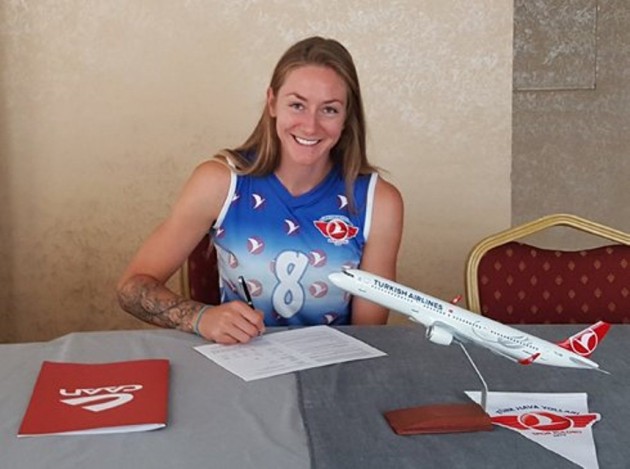 Only until two years ago, ‘Becky’ was competing for the title in the CEV Champions League (losing finals to Eczacıbaşı VitrA İstanbul in 2015, while wearing the jersey of Unet Yamamay Busto Arsizio). Now, she will compete in the Turkish Division 2 for highly ambitious club named Türk Hava Yolları İstanbul (commonly known as THY), who have just been promoted from Division 3!

Between Busto and THY, Perry, who can cover both receiver and opposite position, left Polish top division side Tauron MKS Dąbrowa Górnicza in the midst of 2015/16 season for family reasons. Soon afterwards, she started to prepare to take part in the 2016 Rio Olympics – as a beach volleyball competitor! To be even more interesting, not for the U.S. National Team, but for the Italian (as a partner to Marta Menegatti). Nevertheless, Perry did not fulfill FIVB’s requirements regarding beach volley players who want to participate in the Olympic Games (did not play sufficient number of tournaments before Rio 2016).

So, after a break of year and a half (still competes in beach volleyball for Italy with Menegatti), a 28-year Perry decided to return to indoor volleyball.