TRENTINO Diatec emulated their archrivals of Zenit KAZAN, PGE Skra BELCHATOW and also their compatriots of Bre Banca Lannutti CUNEO as they finished the prelims of the 2013 CEV Volleyball Champions League with a perfect record after they edged on Wednesday Crvena Zvezda BEOGRAD with the score of 3:1. 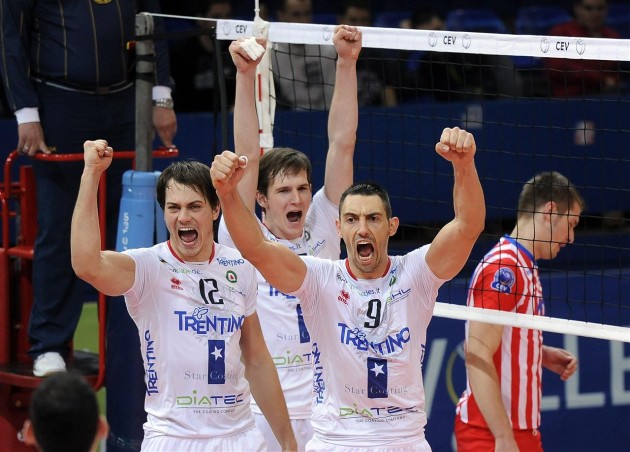 Even though TRENTINO had traveled to Serbia without some major stars such as Jan Stokr, Osmany Juantorena, and Emanuele Birarelli, they still could live up to their reputation and cash yet another win. They started out with a 6:1 run as Stefan Chrtiansky was shaking the Serbian defense but the home guys almost leveled the score halfway through the set (14:15). Still TRENTINO did change gear once more and with Mitar Tzourits and Filippo Lanza on fire could pocket the first set with the score of 25-18.

The second set turned into a close fight where Crvena Zvezda played more aggressively but disciplined at the same time. However, TRENTINO set the pace of the game at both technical time-outs (8:5 and 16:13) and their supremacy was never in danger (25-19).

TRENTINO started out with a splendid 9:3 run in the third set and it looked like the game was gone but they relaxed and started making mistakes so that the hosts fought their way back and by showing their determination could eventually cash their first set in the competition. However, in set 4 they fell apart and the match was sealed by an attack of Bulgarian Nikolay Uchikov that did so contribute the sixth consecutive win for TRENTINO in the competition. Dusan Petkovic and Filip Stoilovic top scored for the home side with 19 and 12 points while Uchikov and Matteo Bursgthaler paced TRENTINO with 32 and 13 respectively.

“We have been trying to win a set since we had embarked on this adventure” says home coach Dusko Nikolic. “I am not happy with the way we started all sets as our opponents could quickly get into the lead. The last points showed that we are still inexperienced but I am still very proud of my players and with what they have done this season”.

“The result of this match was not important for us but we wanted to test out the team without some of our strongest players. I believe we claimed a convincing victory so the outcome of this test is not too bad” stresses TRENTINO mentor Radostin Stoytchev.