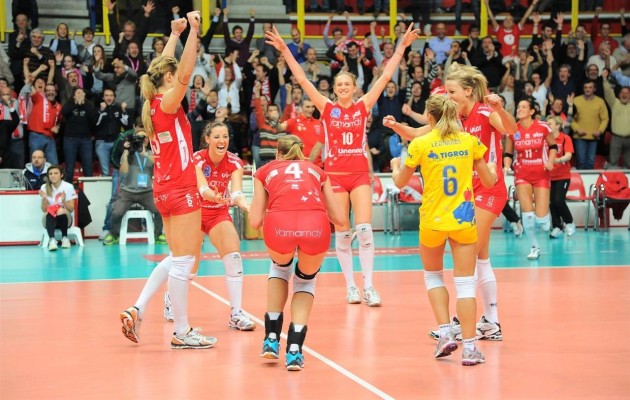 After playing a solid first set, the home heroines eventually lost composure in the next couple of sets so that the guests from Azerbaijan could impose their pace and move to the front (1:2). Megan Hodge and Indre Sorokaite top scored in the end for Azerrail with 24 and 18 points respectively but still the hosts could find their way back into the game, as Francesca Marcon and Julian Faucette were replaced by Gilda Lombardo and Maren Brinker. The German outside hitter eventually turned into the real match winner for BUSTO ARSIZIO as she scored 16 points and was named MVP of the game. Libero Giulia Leonardi stood out in defense while Brinker and Lombardo set the pace in the tie-break with Brinker scoring the last three points for the joy of some 2’600 fans in attendance at PalaYamamay.

Unendo Yamamay played superbly in the opening set, displaying good quality from the serving line and a solid block; Margareta Anna Kozuch scored 4 points for the hosts in this section of the game while Manon Flier registered 5 for Azerrail. The guests from Azerbaijan dominated at the net in the second set killing 6 blocks with Hodge pacing her side with 7 points while BUSTO ARSIZIO did commit a flurry of mistakes. In the third set the hosts got back on track but Azerrail was still not to challenge as Hodge and Sara Anzanello displayed once more all of their quality and potential. As Maren Brinker joined the game, she immediately contributed 5 points to her side’s account but Azerrail showed great determination to finish it off with Indre Sorokaite standing out in blocking and attack. Home mentor Carlo Parisi opted for Brinker and Lombardo in the fourth set and this move changed the course of the game; after a breath-taking final rush and via the stellar actions displayed in defense by Leonardi and Veronica Bisconti, Unendo Yamamay could call for the tie-break where Brinker and Lombardo anchored their side to a much desired home win.

“This is a very important result and after this win we know and realize that we can go for a positive result also next week in Baku” said home mentor Carlo Parisi.

“We dissipated our lead in the fourth set with two terrible mistakes and in the fifth set we simply did not play” singled out a disappointed Alessandro Chiappini, head coach of Azerrail BAKU.

BRA W: Logan Tom broke her ankle ligaments, could be out of Superliga