Maliye Milli Piyango ANKARA edged Andreoli LATINA 3:1 in the first semifinal match of the 2013 CEV Volleyball Cup – Men. Opposite Nikola Gjorgiev and outside hitter Marko Ivovic paced the home side by scoring 17 and 15 points respectively, waiting for the return game coming up next week in Italy. 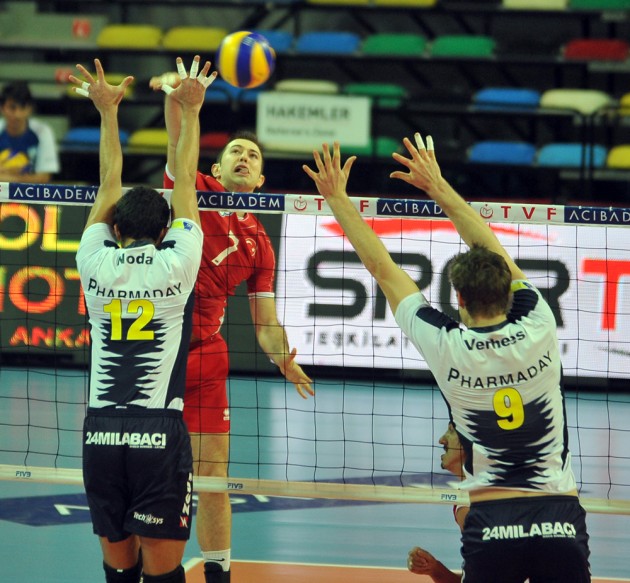 After a very close start whereby both teams showed their potential, Ivovic scored two consecutive aces to force LATINA head coach Silvano Prandi into a time-out (10:7). However, the hosts did not slow their pace down and kept control of the operations also by the second technical time-out (16:13) before widening the gap and sealing this section of the game with the score of 25-19.

The score remained very close also in the early phases of the second set and this time it was Jakub Jarosz who moved the charts up to 13:11 for LATINA so somehow obliging home mentor Josko Milenkoski to ask for a time-out. His guys responded well as they flipped the charts around already by the second technical time-out (16:15) and they steadily accelerated (19:16, 21:17) never looking back up to the final 25-22.

Andreoli LATINA got off to a flying start in the third set as they were powered by Alberto Cisolla from the serving line. Milenkoski stopped the game as his guys were trailing 1:6 and that worked quite well as the score was eventually evened at 12 all. Maliye Milli Piyango dictated the pace of the game halfway through the third set (16:14) but great serving provided by Jarosz and Cisolla did once more change the course of the game with Andreoli LATINA calling for the fourth set after cashing their fourth set ball (21-25).

The home side regrouped in the next set with Nikola Gjorgiev acing for the 7:2 that prompted a time-out asked by Andreoli LATINA. The hosts enjoyed a margin of four by the second mandatory stop after a point contributed by their middle-blocker Burak Hascan and Maliye Milli Piyango could eventually cruise to a well-deserved 3:1 win (25-19) to get the right edge before the return match scheduled for February 13 in Italy.