Montreux, Switzerland, January 27, 2012 – The Montreux Volley Masters women’s tournament, which usually takes place on the shores of Lac Léman in Switzerland annually, will take a break in 2012 due to a crowded calendar. 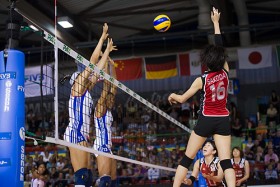 With the FIVB Volleyball World Grand Prix, Olympic Games Qualification tournaments making it hard for teams to commit to the tournament, it was decided that this year’s Volley Masters will be deferred until 2013.

Last year Japan finished top of the standings ahead of Cuba in second and China in third.

The 2013 edition of the competition is scheduled to take place from June 4 to 9 next year.