Galatasaray ISTANBUL easily downed Crvena Zvezda BEOGRAD of Serbiain the first leg of action for the Challenge Round of the 2012 CEV Volleyball Cup by scoring a home win in straight sets (25-14, 25-19, 25-16) to wait now for the return game scheduled for next week in Serbia’s capital city. 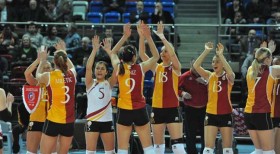 Some 1200 fans were in attendance tonight at “Burhan Felek” Volleyball Hall with the home side enjoying a marvelous start and quickly going up 8:3 and 16:6 in the opening set, before wrapping it up at 25-14. Anchored by great Italian setter Eleonora Lo Bianco and the great spikes of Rosir Calderon, Natalia Hanikoglu and Sladjana Eric,  Galatasaray dictated the tempo of the game also in set 2 and even though Crvena Zvezda responded with the side-outs of Ana Bjelica, still the clear dominance of the home side was never to be questioned (25-19).

The group mentored by Serbian head coach Dragan Nesic and with Eric being also a former player of “Red Star” finished it off in straight sets, with Cuban Rosir Calderon top scoring with 18 points well supported by Hanikoglu and Eric who totaled 14 apiece. Bjelica paced Crvena Zvezda with 15. The team that will finally make it to the semis of the CEV Cup will be determined next March 1 upon completion of the return game in Serbia.