Dresden, Germany, December 12, 2011. DRESDNER SC is about to play its second home match in the prelims of the 2012 CEV Volleyball Champions League and this task comes right at the end of a very busy schedule. 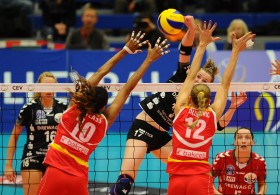 This past weekend DRESDNER SC defeated their opponents from LEVERKUSEN in the Bundesliga (3:1, 25-17, 25-21, 23-25, 25-18) and on Monday evening the German rookie was supposed to play VC WIESBADEN for the 4th finals of the national cup. To round out these busy days DRESDNER SC will host France’s ASPTT MULHOUSE for the third round of action in the Champions League on Wednesday.

“Our priority remains the match with MULHOUSE since there are not so many chances to be on a par with an opponent in Europe’s finest competition and this time we want to take this opportunity to celebrate our first win also to the delight of our fans” says head coach Alexander Waibl.

The national cup remains nevertheless important as well as DRESDNER SC wants to make it to the semis coming up in late December. Waibl used the Bundesliga match played this past Saturday to recover some players that were recently ill or injured.

Friederike Thieme used this chance to deliver a stellar performance being the best scorer of the game with LEVERKUSEN while Anna Cmaylo played well too after a break of two weeks due to a knee injury.

Additionally, 18-year old Juliane Langgemach made her debut in the first division of the national league.

Even though DRESDNER SC lost the third set, coach Waibl was satisfied with the result. The group spent the night in Frankfurt to prepare for the next match in the national cup.

“We will definitely play with our starting six. VC WIESBADEN has been playing great this season especially in blocking and in reception. They also can profit of the home advantage and the great atmosphere they always have there. Regina Burchardt, Martina Novotna and Steffi Lehmann are great spikers. However, we delivered a strong performance for our previous away matches in the national cup so we are ready to take up this challenge” adds coach Waibl.

The players will be flying back to Dresden on Tuesday morning to get immediately ready for their second home match in the Champions League versus ASPTT MULHOUSE.

CEV Cup: Zaksa on the road to TRENTINO without Swiderski