The home guys of Luxembourg fought bravely on Sunday at d’Coque but were eventually edged in straight sets by their guests from Sweden (23-25, 20-25, and 17-25) in the first match scheduled for the opening round of the 2013 CEV Volleyball European Championship. Sweden evidently stood out with the great physical skills of their players, but nevertheless Luxembourg was able to keep the score very tight for the first two sets. 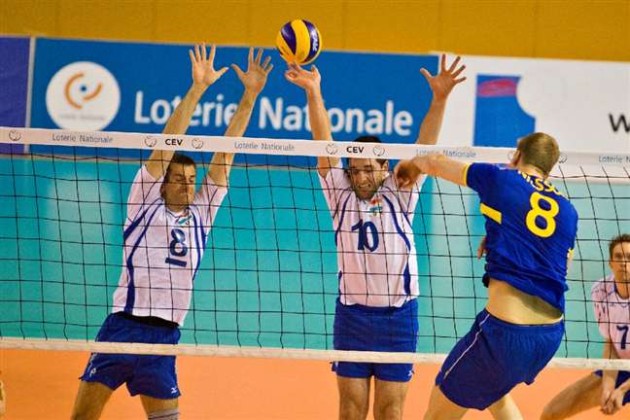 The start of the game was actually pretty encouraging for the home side as Sweden got surprised by the fighting spirit of the local “Lions” who combined smart block-outs with a very solid defense. Tim Laevaert and Frantisek Vosahlo were able to find their way through the Swedish block but the group around superstar Marcus Nilsson claimed a margin of two points while approaching the final rush thereby paving the way for the final 23-25.
Even though this was not the happy end they were looking for in the opening set, the home heroes of Luxembourg started out with a good pace in set 2 as well, going up by the slimmest margin at the first technical time-out. Great blocks eventually opened up this gap (16:13) for the home side before Sweden, and especially captain Nilsson – best scorer in the end with 17 points – stormed back to re-assert their supremacy changing their pace to finish it off at 20-25.
Luxembourg ran out of fuel in set 3 and even though the local side tried to resist by displaying some good actions in defense, still Sweden’s dominance was never to be questioned, thereby going for the final 0:3 waiting for the return match scheduled for next Sunday in Sollentuna.