Italy booked its ticket to London with a dramatic victory in the final of the 2012 Olympic Games - European Qualification for men in Bulgaria. Both teams in that final found out that earning a spot at the Games was no easy task as the Olympic ticket found its owner only after a five-set battle. Italy pleased its fans on the stands of Arena Armeec hall in Sofia as it eventually claimed victory over Germany by a final score of 3:2 (25-22, 26-24, 19-25, 22-25, 15-12). Despite home team Bulgaria’s absence from this final, the stands were packed with almost 9000 spectators, with CEV President André Meyer among them. 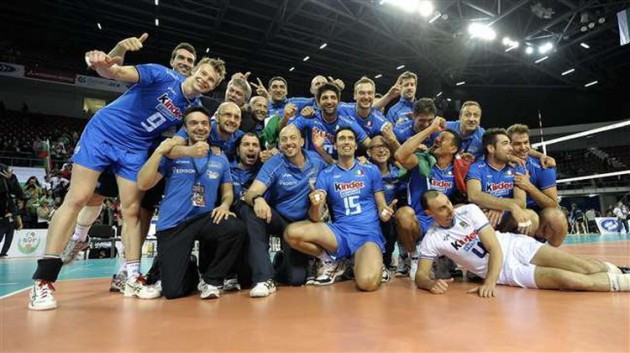 Germany seemed to have entered the match more concentrated than the opponent as it rushed into a 4-0 lead at the beginning of the first set. But this did not last very long.  Gradually the Italians started to catch up and at 14-13 took over the scoreboard.  Italy’s serving, attacking and blocking were all working better than those of Germany. With Alessandro Fei contributing 2 aces and 100% in offense his team won the set by 25-22.

The second set was far harder contested with frequent changes in the lead. Both teams improved their reception and, hence, their offense became way more productive. The first time the gap exceeded 2 points in this set was at 21-18 Germany’s way.  The last was at 22-19. Italy stayed focused, came back and eventually closed the set at 26-24 with Fei blocking for the last point.

Germany greatly improved its performance in the third set and, once it was up 5-3 in the score, it never allowed Italy to get any closer behind.  Setter Simon Tischer was doing a really good job organizing the German offense as György Grozer and Denis Kaliberda were spiking point after point. Two aces in a row by Jochen Schöps gave Germany the first set-point at 24-18. Two rallies later Grozer put an end to the set with a powerful blast for 25-19.

The fourth set was quite even through the first technical time-out. After that Germany took control on the court not without the help of the too many mistakes Italy made in this set. The players of Vital Heynen built up a 3-point lead and were able to maintain it through the end. Although Grozer was once again Germany’s top gun in this set, it was Kaliberda’s block-out that finished it off at 25-22.

Italy woke up for the beginning of the tie-break and rushed to an 8-3 lead at the side-switch.  Shortly after that some great blocking efforts by Germany narrowed the gap down to 6-8 to stay in contention through the rest of the set.  But Italy’s playmaker Dragan Travica stayed in control of the situation and eventually set the ball for that fantastic spike by Cristian Savani that closed the set at 15-12 and sealed the Olympic ticket for Mauro Berruto’s team.

György Grozer topped the best scorers’ chart of the match with another impressive total of 28 points.  Ivan Zaytsev was the most prolific player for the winning team with 19 points with teammate Michal Lasko adding another 17.