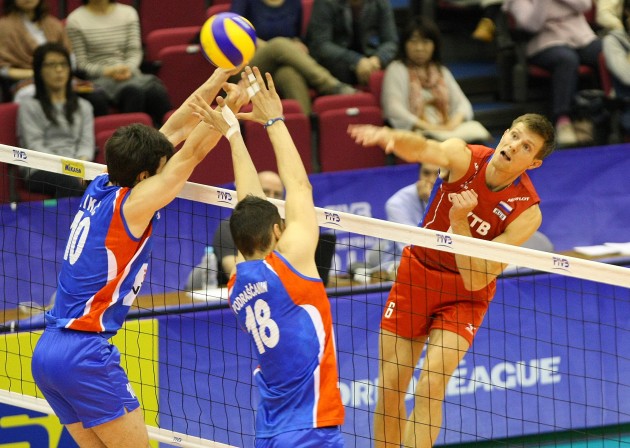 Russia, who return to the venue where they won the 2011 FIVB Volleyball Men’s World Cup last year, scored just two points more on the day than Serbia, with the total tally at 104-102.

Yury Berezhko topped the scores with 23 points while his towering teammate Dmitriy Muserskiy put up six blocks on the day in a strong defensive effort. For a spirited Serbian side, it was 21-year-old Aleksandar Atanasijevic leading the way with 16.

Russia started out strong jumping ahead off the back of a blistering spike by Berezhko that put them up 7-4. But Serbian youngster Aleksandar Atanasijevic got his team back on track as they took the lead 13-12 with a pair of drives. But strong Russian blocking mid-set helped them push back ahead by four, 17-13 before Serbia’s Marko Podrascanin sailed a serve wide and Alexander Abrosimov scored an ace to clinch the set for the world No.2.

Serbia responded well to open the second three points ahead. Atanasijevic‘s serves kept them ahead going towards the middle of the set but Russia won a long rally to bring them back in contention. Russia’s Berezhko attacked well down the stretch with a trio of spikes, and although Serbia remained close with fiery play from Dragan Stankovic, Moroz eventually took the second for Russia with a hard strike.

The third set proved close as well, with Serbia’s Stankovic dropping a clever tip for a score followed by a wonderful block to go up 10-7. But Berezhko kept attacking well for Russia as did Moroz who brought them to within one point at 19-18 with a soft put-over at the net eluding two Serbian blockers. Uros Kovacevic played with great emotion late, scoring two at the net venting with a yell that filled the arena. The captain Janic stole the second for Serbia with a stubborn block on Moroz, taking it into a fourth set.

Serbia carried the momentum into the fourth, again with Kovacevic attacking well, his spike sparking a run of five straight points that put his side up 11-5. A determined Russia clawed back though, with substitution Pavel Kruglov posting a gorgeous block to come within one at 15-14. But Serbia’s Stankovic did one better, with two critical blocks late on to go ahead 21-16. Milan Rasic pitched in an ace as Serbia brought the match level to take the match to a tie-breaker.

The tie-breaker was won for Russia early on when Berezhko took charge, with four of his side’s first six points taking them way ahead at 6-1. Pavel Kruglov finished off the match with two devastating spikes to pick up an edgy win.