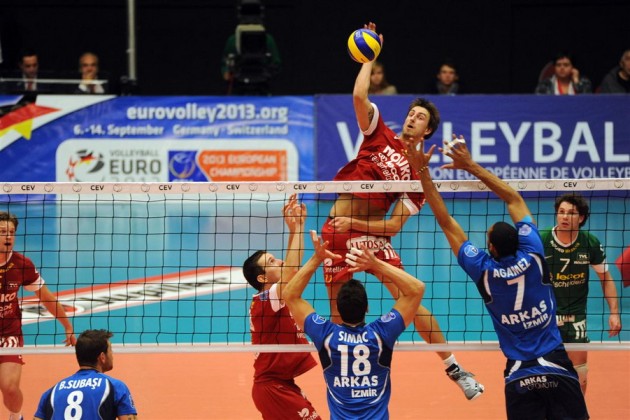 The second set started with the score remaining very close (5:6) but IZMIR gradually asserted its supremacy (5:9 and 9:13). Supported by the home audience, Noliko drew level at 14 all and after that both teams completed their next side-outs up to 19:19. Arkas broke away (20:23) but Noliko came back once more and finished it off with an ace (25-23).

Arkas IZMIR dictated the pace of the game in set 3 (4:8, 5:10) but Noliko pulled together for the 11 all with a series of six services by Hermans Egleskalns. With another impressive run, Noliko moved the score from 15:13 to 25-18 to go for the provisional 2:1.

In the beginning of the final and deciding set, the score remained close before Noliko got up 10:7; Arkas stormed back once again (13 all) but it was Noliko that had the upper hand in the end (15-13) for the joy of the local audience. Egleskalns and Colombian Liberman Agamez top scored for Noliko and Arkas with 15 points apiece.

“Today we played much better than we did last week although not consistent enough. Our passing was not good and we still had too many ups and downs” said Canadian Glenn Hoag, head coach of Arkas, after the match.

“This is surely a team victory as all players included in the roster joined the game tonight and could testify their importance for the team. It is just wonderful to win the game in this splendid scenario with the crowd accompanying all of our actions very enthusiastically” said Noliko assistant coach Johan Verstappen.

CL M: CUNEO scores fourth win to stay atop of the charts in Pool G