Five more days have left until the start of one of the best sports competitions in the world. 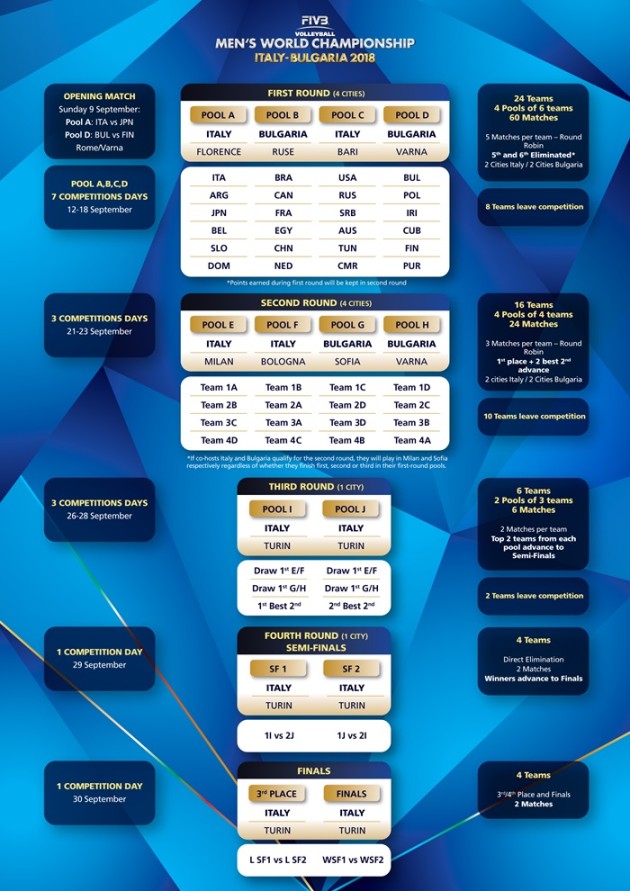 The 13th edition of the World Championship will be held in Italy and Bulgaria, starting from 9th September and will last until day of this month, when the final game will be played.

Also, here is the competition formula:

– At the end of the second-round matches, the rankings of the four pools will be drawn up taking into account the points scored by each team in the first and second rounds. The four pool-winning teams of the second stage will access the third stage, together with the top two of the second-ranked teams.

– The six teams competing in the third round will be divided into two three-team pools by a draw. After the matches played in a round-robin system, the top two in each pool will qualify for the semifinals and finals.

The third round with Pool I and J is not fair because in the second round 2 teams basically get eliminated for nothing.
Why can’t we just have a normal 8 team final instead of 6 teams? It makes no sense!

Eliminated for nothing ???? well its not fair u have a poor performance in the first stage and then go equal in second round, whats the point to play first stage anyways ???, for example lets say that Russia takes first stage to make adjustements and they go 2-3 in pool play and they enter as 4rth ranked team, u think is fair for other teams that russia who wasnt play perfectly have the same chances than tem in the second round ???? i dont think, so, ther system is not perfect i dont like final fix im more a final 8 guy but thats they way is done, so for example after the first round Italy should go 5 win 2 Loses, i dont know who is gonna be second in Pool B with brasil and France, but France withouth Ngapeth is a mess so maybe France second, and third Serbia, Cuba, Filand or Puerto Rico can be 4trh in D group and cause of being 4rth they are almost eliminated, they will go there only to play some hight quality games and get experienced nothing else. u have to be consistent to play round three thats the main reason of all of this.