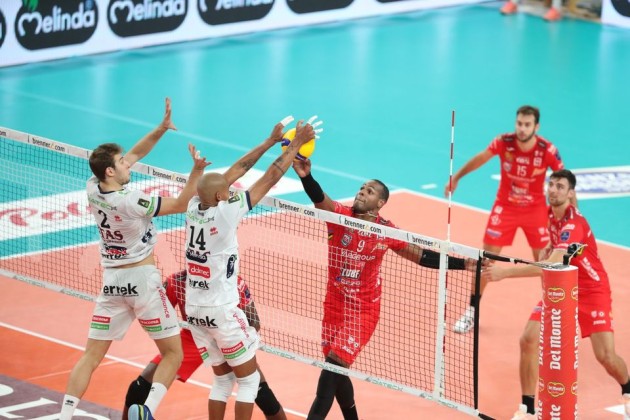 After six months, Itas Trentino returned to their home ground for an official match. They were able to overcome Cucine Lube Civitanova’s initiative (1-0 and 2-1 in sets) in the first leg of the 2020 Italian Super Cup semifinal (3-2: 21-25, 25-19, 16-25, 25-21, 15-9) which was held in front of 826 spectators. However, Trentino made only a promising first step towards the 2020 Del Monte® Supercoppa final given that Lube will have the chance to turn things into their favor in the rematch at home, in one week.

The Dutch opposite hitter Nimir Abdel-Aziz notched 23 points (4 aces and 4 kill blocks) for the winning side but wasn’t hitting the ball according to the reputation he has (38% attack). Dick Kooy served 4 aces and was on a high level in defense (77 % reception; 35 % perfect). Cuban-Brazilian outside hitter Yoandy Leal scored 19 points for Lube. Cuban middle blocker  Robertlandy Simón made 4 kill blocks.

As for the other semifinal, Sir Safety Conad Perugia made quite a stock before the rematch against Leo Shoes Modena.

Cuban-Polish outside hitter Wilfredo León top-scored for the winning side with 16 points, while Argentinean middle blocker Sebastián Solé set up 5 kill blocks. German outside hitter Moritz Karlitzek stood out in Modena with 15 points.

POL M: Warszawa beat Będzin, Jastrzębski down Aluron after more than 2 and a half hours