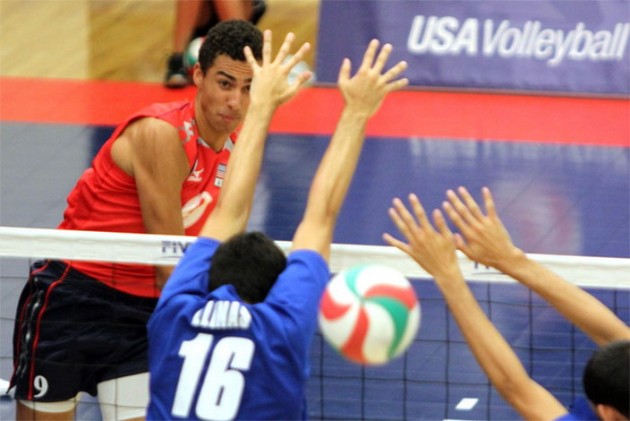 United States will face Canada on Saturday at 17:30 in a rematch of the most recent NORCECA Men’s Junior Continental Championship in 2010, while Puerto Rico will meet Mexico for the bronze medal. The top three finishing teams in the tournament advance to the 2013 FIVB Volleyball Men’s Junior Continental Championship. By reaching the title match, both United States and Canada have guarantee a spot in next year’s World Championship event.

The United States service kept Puerto Rico out of system that included a 7-0 ace advantage. The U.S. added an 8-6 block advantage and 45-27 kill margin.

The United States controlled the middle stages of the opening set pulling away to a 25-15 victory that included Patch scoring seven points and three of the team’s four blocks. USA’s Gregory Petty started a 4-0 run with two aces to put the U.S. in front 7-4 in the second set. Puerto Rico called timeout trailing 18-12 in the second set and the lead expanded to 24-13 with consecutive Christenson aces and back-to-back blocks by Tarantino on a 5-0 run. Puerto Rico saved three set points before a James Shaw kill ended the set at 25-16. Puerto Rico scored three unanswered points to level the third set score at 18-all, but the United States responded with a 3-0 run of its own including a Scott Rhein ace to put the score at 21-18. The USA finished the set with a 25-20 victory.

AVC M: Another victory for Kaleh