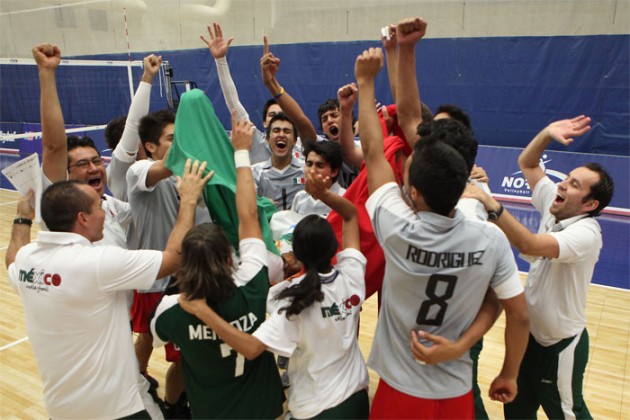 Mexico secured the third and final spot available to NORCECA into the 2013 FIVB Volleyball Men’s Junior World Championship in Turkey. In addition, the bronze medal represents Mexico’s first-ever medal in the age-group. Puerto Rico was attempting to earn is fifth overall medal in the event as it had won silver in 2000 and 2002 along with bronze in 2004 and 2010.

Mexico’s net defense held firm for a 10-4 block advantage. Mexico also limited its errors to seven in the match and benefited from 20 Puerto Rico errors.

“From the start we knew it would be a tough match,” Mexico captain Jonathan Ponce said. “We knew Puerto Rico would never stop fighting. We tried not to lose our focus and maintain our composure throughout the match. We wanted to finish the match strong. I also want to congratulate Puerto Rico for a good match and tournament.”

“We knew this would be a very hard match because only one spot was available for the World Championship between the two teams,” Mexico head coach Justo Arias said. “Pressure was on both sides. My players went in focused and followed the directions we had given them. There were moment we lost focus, but we regained it quickly. There were moments we could not stop their fast balls, but we adjusted to it. Puerto Rico never stopped playing and is a great team. With the victory we got we came here for with qualification into the World Championship.”

“First of all I would like to congratulate Mexico for qualifying for the World Championship,” Puerto Rico head coach Ramon Hernandez said. “We had a lot of problems siding out today. We knew we had to play well. Mexico is a feisty team with great defense and could put the ball down. Obviously we are disappointed with the results, but I am proud of my team never stopping to compete. We came up short today. Teams like Mexico and Canada are getting better and ranked higher because they are investing into their programs, while we are not having the results we would like to have.”

“Congratulations to Mexico for the win and qualification into the World Championship,” Puerto Rico captain Cristian Rivera said. “Our two teams have a long history with this group, and we came up short this time. I am disappointed with our performance, but we will take this as a lesson and not as a defeat. We can and will get better. I am confident of that.”