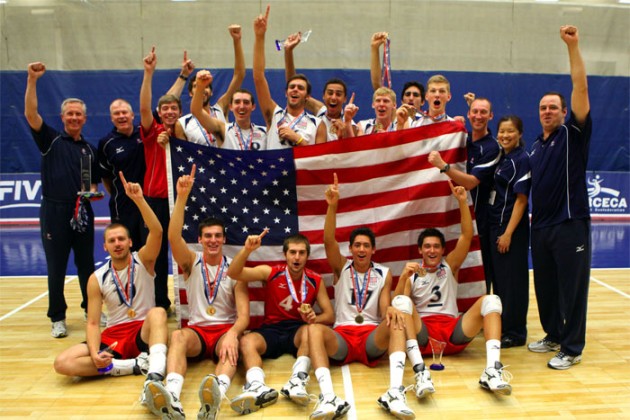 The United States has now won the tournament’s gold medal for the second straight time having defeated Canada in the last edition of the biennial tournament held in 2010. The Americans have now medaled in all eight editions of the tournament, including two silver medals and four bronze medals. Canada has now finished with the silver medal in the last three NORCECA Men’s Junior Continental Championships to go along with titles in 1998 and 2002 and a bronze medal in 2006.

By reaching the title match, both United States and Canada had already guaranteed spots in next year’s FIVB Volleyball Men’s Junior World Championship as the top three places in NORCECA advanced. Earlier today, Mexico claimed the bronze medal for the third spot.

Team USA held a commanding offensive edge with a 61-49 margin in kills and 5-1 ace advantage. The Americans converted 52.6 percent of its attacks for points with a .362 hitting efficiency. Canada produced a 10-7 margin in blocks to go with a 44.1 kill percent and .261 hitting efficiency.

The United States held a 19-16 advantage before Canada knocked down two points to cut the gap to 19-18. Gregory Petty served an ace to put the Americans back in front by three 23-20 at a Canada timeout. Canada came out of the break with three of the next four points to tie the set at 24-all. Patch slammed a kill to yield a second set point and Canada followed with an attack into the net for a 26-24 United States victory.

The Americans jumped out to a 6-1 advantage in the second set. Ryley Brendan Barnes served an ace in helping Canada close to two at 11-9.  The USA jumped the lead back to six points at 15-9 following a four-point run including a Nicholas Olson block. The Americans finished out the set strong with a 25-17 victory.

Canada held a slim 8-6 lead at the first technical timeout of the third set, but the USA scored four straight points out of the break to take the lead at 10-8. Canada bounced back to knot the score at 10-all after its timeout. The American regained a two-point cushion at 13-11, but the Canadians responded with a 6-2 run to take a 17-15 advantage. Canada took a 22-18 lead on a block by Stephen Timothy Maar. Olson scored consecutive kills to pull the Americans to within one at 23-22, but Barnes hammered the Canadian winner at 25-23.

Canada started the fourth set with a 4-0 lead. Michael Henchy served back-to-back aces and the American leveled the score at 5-all. USA reached the first technical timeout leading 8-7. Barnes downed a kill to reverse the lead to Canada at 12-11. Scott Rhein came off the bench to serve an ace yielding a 16-15 American lead at the second technical timeout. Petty hammered consecutive kills to push the USA in front 21-19 at a Canada timeout. The American lead expanded to match point at 24-19 out of the break with three consecutive Canada attack errors. Canada saved two match points before the USA ended the match at 25-21 with a Petty kill.

“First off I want to say Canada played a great match today,” United States captain Micah Christenson said. “They forced us to play our best match of the tournament and forced us to pick up our game. Our entire staff, all the way down to Jake (Schick) doing stats, it was a whole group effort winning the tournament.”

“First, on behalf of USA Volleyball, congratulations to Canada for a great match and tournament,” United States coach Peter Hanson said. “They came in to Colorado Springs early and trained and scrimmaged us. That really helped our team prepare for the tournament, and I hope it helped them as well. Our guys did a great job executing the game plan tonight. And last, I want to say it has been a wonderful experience here at the United States Olympic Training Center, and I appreciate them hosting the tournament here.”

“USA was great today and Coach (Peter) Hanson and his staff did a great job preparing his team as always,” Canada head coach David Preston said. “Our guys did well today, and the players coming off the bench provided a lift. We came up a little short – not because of a lack of effort but more of what the USA did. Canadian volleyball made a big step forward today because of these 12 guys on the court. I want to thank the U.S. Olympic Training Center, its staff and USA Volleyball for the great hospitality throughout our stay here.”

“I want to congratulate the United States for the win – they played great,” Canadian captain Milan Nikic said. “They stopped our middle attack and put us into bad spots.”