RUS W: Tatiana Kosheleva – We shall try to use the chance

About the mood and back injuries, the upcoming Olympic tournament qualifier in Tokyo and our competitor in an exclusive interview with the Russian team of Tatiana Kosheleva. 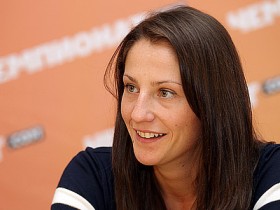 The current world champion Russian team went to Tokyo to take part in the Olympic tournament qualifier, at the end of last week. However Tatiana Kosheleva joined the team later on May 16. In an exclusive interview with Chempionat.com 23-year-old volleyball player said the reason for this decision.

– Tanya, how are you feeling now? When you fly to Tokyo for the Olympic qualifying tournament?

– We have solved, that I shall depart evening flight of the 16th, Wednesday. I feel much better than because it was absolutely bad.

– During what moment you were injured?

– The back hurt and on the tournament in Ankara, and up to its beginning. Even during gathering it has started to ache a bit. At the competition in Turkey all has become aggravated up to the extremest degree. By the end I could not play any more normally.

– What do the doctors say? How long will it take to recover?

– At any illness, rest is necessary. To me have given some days, and now to me it became better. We all understand that we must win. If I can somehow help the team, I shall be very pleased.

– Failure on tournament in Ankara was forgot or at little girls till now bad mood?

– Certainly, the mood is not very positive, because we did not fulfill the task that we face. I can only congratulate the Turkish team. Yes, bad refereeing has affected but what now to speak about it. Their country wished to get on Games to London, and they have made for this purpose all possible and impossible. Now we still had one more chance so we should realize it.

– Problems with refereeing is a distinctive feature of tournaments which pass in Turkey, or simply Russian in the world not love much?

– I would not say that the Russian did not like. This is not true. Once again, Turkey would like to have their country represented at the Olympics in 2012. They have done everything necessary for this. Personally, my opinion is, this is absolutely normal. They needed this ticket, and they earned it by any means.I can be glad only for Turkey and very be afflicted for failure of the team. To them were not any other chances, and their good fellows realized that this opportunity. We shall still be overcome for the ticket.

– You have been to Tokyo many times and even played in the hall, where the tournament will be held. What can you say about the local conditions?

– Yes, I have repeatedly been in Japan when performed the World Championships and Grand Prix. We always lived in the same hotel, played in the hall. Excellent condition. As for me, so everything is in order. I am unpretentious (laughs).

– Do not you think that you should not go to Japan, considering of your injury?

– In a team highly qualified doctors and coach. That was our decision. If I can help the team – I’ll be very happy. Of course, if the condition became worsen, it’s no sense on me. This is logical, and everybody understands that. Hopefully, everything will be fine.

– At this tournament, among other contenders will be four Asian teams – Japan, Thailand, Korea and Taiwan. Is there a kind of Asian teams in any distinctive feature?

– Yes, of course. They play faster and combination volleyball. They have a great game in defense, and that they take it. In Asian, volleyball player is not very tall, but they make it a good game to protect the back line. They are harder to score. Plus a variety of artful combination significantly complicate the game of their rivals. However, before we with them successfully enough consulted, so I hope, that special problems will not arise.

– What about Serbian and Cuban?

– Serbian intensify. At a recent tournament in Turkey, not all Serb leaders were playing, so they certainly will come to a more optimal composition. They play more clear to us in volleyball are put to a ball (smiles) more feasibly.(laughs). As Cuban, they have always been famous for the fact that the high jump and severely beaten. We will try and jump high, to put highly to block and play good defense (laughs).

– This tournament is our last chance. Surely everyone will die on the court, and to give out all the best on 110% …

– Believe me, we both came to Turkey. We’ve all dreamed of the Olympics has to be selected in Ankara instead to go to a tournament in Tokyo. There was not such and Well, we have one more chance, so let’s try to get a freebie. Maybe someone thinks so, but it is absolutely not true. Just because the circumstances. Do not forget that our team is the players age, which is very difficult. They had just finished the club season, played the final. Two days passed, and they’ve had to switch to the affairs of the team. But the girls spent a lot of emotion, nervous and physical strength. It’s hard to switch immediately. Fans who are not connected with the sport, and sometimes can not understand this and think, “Why are our languid women are playing badly!?” (Laughs). Just sometimes people get tired, and we are not robots. We’d like to get to the Olympics. We will have a chance, and we will do our best to use it.

TUR W: Kimura and Aydemir will sign for Vakifbank

Jovana Stevanović for WoV: “We have just...