France receiver Kevin Tillie was a key player and third best scorer for his country during the FIVB Volleyball Men’s World Championship Poland 2014, claiming 116 points. He spoke to the French Volleyball Federation about playing for the national team and for Arkas, who are currently second in Turkey's league. 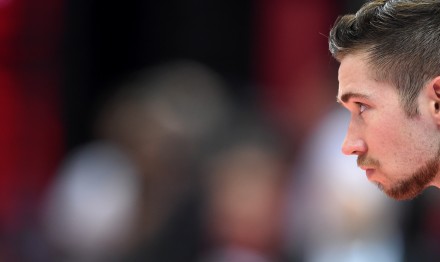 After playing in France, you moved to North America. What are your memories of the time you spent in Canada and the United States?

“Canada was the beginning of my experience as a college player. It was great to be able to combine my playing career with my studies. I also played with UC Irvine in sourthern Los Angeles, winning the league twice. It was a fantastic opportunity and I learnt a lot from current USA coach John Speraw“

After the United States, you joined Ravenna in Italy and then Arkas Spor Izmir in Turkey last summer. Why?

“After four years abroad, I did not want to play in France. I wanted to continue discovering new countries. Ravenna had a young team and were ambitious. They were the ideal club for my first year as a professional player. The team was successful and qualified for the CEV Challenge Cup, but there were financial difficulties and I moved to Izmir. Glenn Hoag is one of the world’s best coaches and the Turkish League also features an impressive line-up of players.“

“Yes, we were all in Ankara at the same time last week. Antonin (Ziraat Bankasi) and Samuele (Galatasaray) were playing against each other. Izmir were playing against Halkbank. Unfortunately, I was unable to play due to a knee injury, but I feel better now.” said Kevin Tillie.

What is life like in Turkey, outside of volleyball?

“Izmir is quite a modern city. I have several Canadian friends in the team and we often get together. Life in cities like Istanbul, Izmir or Ankara can be very pleasant.”

“I believe that Iran could achieve something...