Jovana Stevanović for WoV: “We have just begun…”

Jovana Stevanović of Pomi Casalmaggiore spoke for WorldofVolley about the tremendous journey of her team in the CEV Champions League 2015/16. 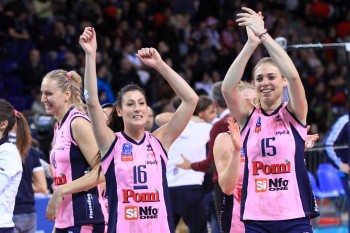 Serbian player and her team will play at the CEV Champions League Final Four for the first time ever, while on top of that they will be the hosts of this prestigious event.

What is the feeling of being at the Final Four of the CEV Champions League?

“It’s amazing! Pomi Casalmaggiore have just begun to make their way toward the big league. Above all, we have made a great result in the group stage by finishing at the first place, which proved our quality. It is a great satisfaction to play against such big teams that are much more powerful than us if you look at the financial situation. Still, we have proven that we belong to the very top of the European volleyball and this result proves the high quality of the Italian Championship.”

What was the reaction inside the team when you found out you got the organization of the Final Four?

“At first, we were all in shock, but at the same time we felt a great satisfaction for everything that we had achieved in the past few years in Italian Championship. It is a great step forward, both for me and for the club. We are all very glad, because we are writing a new page in the history of Pomi Casalamaggiore.”

Pomi Caslamaggiore will play against Dinamo Kazan in the Semi-Finals. Have you followed the results of the Russian team and what would you point out as their biggest strength?

“Yes, I have followed them. They have played against some of our rivals from the Serie A, so we had a chance to analyze their gameplay very well. Dinamo Kazan is a squad of very good selected players, who are quite tall and physically really powerful. Still, we will try to impose our game style in the semifinal clash.”

How important will be home court advantage at the CEV Champions League F4?

“Playing in front of our fans is the best possible feeling and they will definitely increase our chances for success. However, in order to beat such a strong rival, we will also have to give our best down at the court. The fact that the game will be played in Italy won’t be a problem for Dinamo Kazan crew, because they are all very experienced players and they had played a lot of top level games in the past.”

What would be your message to the fans before the F4?

“We have already built a relationship full of love and trust with our fans that I do not have any special message for them now. I know that we will all give our best to reach our goal. That exchange of energy and emotions that we have with our fans is something that many world class teams do not have.”

Elitsa Vasileva for WoV: “If we play good, everything is possible”

USA M: Anderson – “I’m sure that USA will fight for gold”