Petrić for WoV: „Quality of Turkish league surprised me in a positive way“

Nemanja Petrić was a part of a mighty Halkbank trio, along with Cuban Fernando Hernández and Burutay Subaşı, that shattered defenses of the rivals in the Turkish men’s volleyball championship 2017-2018 Efeler Ligi all the way up to the title that was clinched in the playoff finals against Arkas Spor. 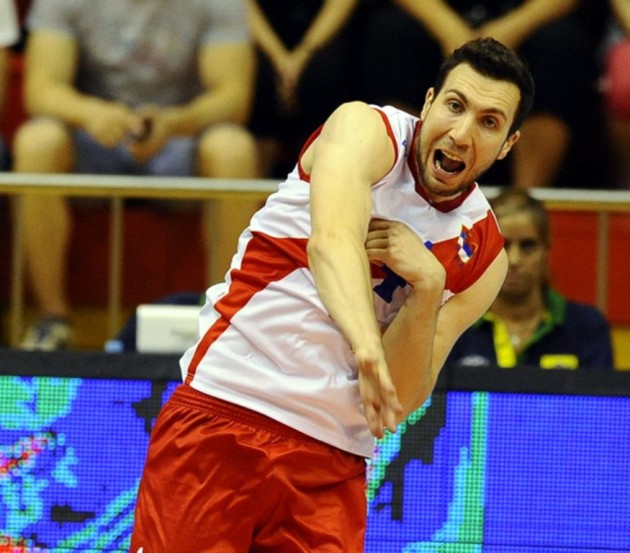 In an interview to our website, the Serbian outside hitter Nemanja Petrić did a recap of the season in Turkey in which he won the national title with Halkbank while battling against some highly strong clubs filled with world volleyball stars such as Ziraat Bankası, Arkas Spor, Fenerbahçe, Maliye Piyango…

What did you expect before coming to play for Halkbank both from the club and from the Turkish league?

„I really didn’t know Turkish league was so good. I came from one of the best teams in the world like Modena but I came to the club that is stable. And, as I said, the quality of the league surprised me in a positive way.“

Despite investing a lot of money, no Turkish club managed to win the trophy in European competition this season. Even Halkbank was stopped already in Playoffs 12. What do Turkish teams miss to make a breakthrough internationally?

„The league is well organized. I was especially surprised with the quality of the teams in the middle of the standings. We really had to make a lot of effort to beat everyone. Honestly, Halkbank could do better in European competition. We had a strong team, but we truly messed up in the group stage of the Champions League knowing our pool was relatively easy. If we played better, we would avoid Perugia in Playoffs 12. We weren’t cautious. It’s was solely our fault. Generally, Turkey has strong league, but if we compare male and female league, female league is stronger. Still, the men’s league has a lot of potential, especially if local players become better, which will be accomplished if their national team makes good result. Then, the bar will be raised higher. The number of foreign player that is allowed to play in the league, which is four, limits the options in the training. It’s simply difficult to have one team in the Champions League and the other team in the Turkish league.“

The very beginning of the season was not promising for Halkbank both in the national championship and in the Champions League. How did you overcome the crisis?

„Frankly, it was expected that we lose Super cup finals to Fenerbahçe, knowing the fact their team remained together for a whole year. After we survived the period of an adjustment, we started to follow the system our coach Kovač established and everything came to its place. It was mostly visible when we beat Ziraat, who was unbeaten until then, and when we won the national cup.“

What does it feel like to win the national title?

„As a club, Halkbank is accustomed to winning titles and its players have the winning mentality. I used to win titles in Italy, so I was glad to continue doing so in the new country, to confirm my quality. It was definitely a nice moment and a memory. We celebrated the title in a restaurant.“

Did you talk to the club management regarding the next season?

„My contract was valid for one year and it expired. I kept good relations with the club management. I’m examining the volleyball market and trying to figure out which option is the best for me. Halkbank is also an option. I received offers from clubs in Russia, Italy, and Turkey.“

You were not enlisted for the 2018 FIVB Volleyball Nations League due to problems with your knee, as head coach Nikola Grbić explained. Can you clarify what is the exact reason for not playing for Serbia this summer?

„It was an internal agreement between coach Grbić and me. I have a chronic injury that requires resting and I am grateful to him as he had an understanding of my situation. I needed to work individually during the Nations League, to focus on an individual practice. This time, I didn’t want to skip basic preparations. I wanted to bring back physical strength, to do systematic preparations.“

How difficult was to make a decision to skip such an important tournament as Nations League?

„It was very difficult decision. Playing in the national team has never been questionable. I was present at their first training to say hello.“

It seems that, when it comes to you, everything is subordinated to the FIVB World Championship in September. How far can Serbia go there?

„The World Championship may be far away but we all miss playing it. We matured as a team, we have players at some positions in the team who are the best in the world and it would be silly to hide our ambitions. We aim for the top. But, at the same time, it’s difficult to reach the top as more and more teams play good volleyball. Still, we have enough strength to oppose to every team, game by game.“

Courtney Thompson: “Things would have been simpler...