Yaoundé, Cameroon, January 16, 2012- African giants Egypt and Tunisia will be meeting in a stunning North African clash in the opening day of the Men’s African Olympic qualification tournament due to start at the Multipurpose Sports Complex in Yaoundé, Cameroon on Tuesday. 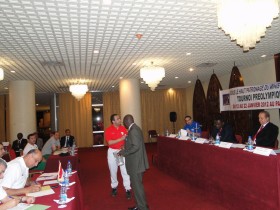 The opening day features also another thrilling encounter between hosts Cameroon who are eager to take full advantage of their home support and the underdogs Ghana.

The fifth team in the round robin tournament Algeria will be in a rest day during the opening.

Five teams will compete at the competition, which runs until January 21 and will see the eventual winners book their place at the London 2012 Olympic Games.

The technical meeting of the competition was held at the Mont Febe Hotel late on Monday where the schedule of the tournament was put during the 5 day event.

The coaches of the participating teams were interested to participate in this prestigious event and dreamed all to be on the world’s best teams in the 2012 London Olympic Games.