Bratislava, Slovakia, January 23, 2012. Middle blocker Tomas Kmet – who currently plays in Germany for BERLIN Recycling Volleys – and setter Monika Smak – who is included in the roster of the Czech champion VK Modranska PROSTEJOV – were recently voted and celebrated as Slovakia’s Volleyball players of the year 2011 after votes were cast by a group of coaches, officials and sports journalists.

The former head coach of Slovakia men’s national team, Italian-born Emanuele Zanini, and the mentor of Slavia EU BRATISLAVA, Zuzana Tlstovicova, got the award for the best coaches of the past year. The men’s national team, whose fifth place at the European Championship stands out as the best result in Slovak history, was quite evidently voted team of the year. A special gala attended by Slovakia’s Head of State, Mr. Ivan Gasparovic, and by the President of the Slovak Olympic 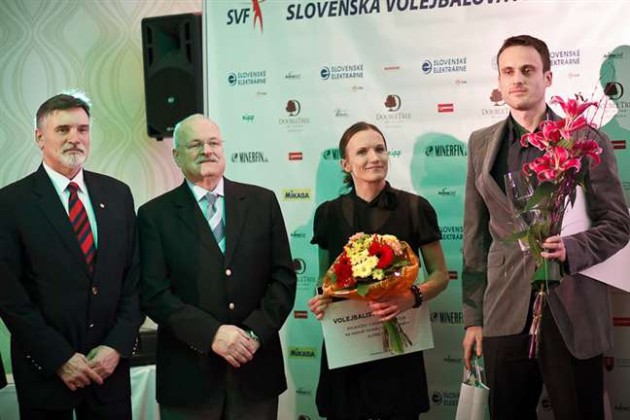 Slovakia’s Head of State, Ivan Gasparovic, together with the President of the Slovak Volleyball Federation and CEV Board member, Lubor Halanda (far left), and the players of the year, Monika Smak and Tomas Kmet

Committee, Mr. Frantisek Chmelar, was organized at “Hotel Double Tree by Hilton” in Bratislava to celebrate the players and coaches that marked the past season. The current head coaches of the Slovak national teams, i.e. Stefan Chrtiansky (men) and Miroslav Cada (women) were also in attendance.

“This is a great honor” said Kmet upon receiving the award. “This pays back for the hard work I have doing in all training sessions and for the good performances I have delivered on court. However, as we have many good players here in Slovakia, this award comes as a little surprise to me. I think that all members of our starting six in the national team deserved this” adds the player who originally hails from Poprad and had traveled from Berlin to attend the ceremony. This is actually the second time Kmet takes the award after being chosen as Volleyball player of the year already in 2005.

Monika Smak celebrated a “treble”, receiving the award for the third consecutive year and for the fifth time in her career. The 39-year old setter is the absolute star of female Volleyball in Slovakia. After claiming the national championship in Slovakia, France and Poland, she first moved to Germany and then to Azerbaijan before almost returning back home after joining VK Modranska PROSTEJOV in the Czech Republic.

“Last year I lived a very special experience by spending the season in Azerbaijan. This time I am playing for VK Modranska PROSTEJOV, so very close to my home. We recently made it to the Playoffs 12 of the CEV Volleyball Champions League and our main goal is to retain the national league. I hope I’ll be able to join the national team for the qualifier to the 2013 European Championship scheduled for next September because after a long time we’ll be playing again in Poprad, my hometown” she singles out. She needs one more award to equal the record of Adriana Marcekova who received this distinction for a total of 6 times.

Emanuele Zanini, who left the men’s national team right after a brilliant campaign, was voted coach of the year for the fourth consecutive season.

“We had a great year and I am proud to say that everyone in Europe now knows the names of players such as Tomas Kmet, Lukas Divis, Emanuel Kohut, Martin Nemec or Martin Sopko. None can underestimate Slovakia and I wish the guys all the best for the Olympic qualifier in Sofia” says the Italian coach.

On the other hand, Zuzana Tlstovicova was voted coach of the year for the first time in her career after she guided Slavia EU BRATISLAVA to their thirteenth national crown.

“I have great memories from last year’s finals. We were not the favorite but we finally beat Doprastav BRATISLAVA. This award comes as a real surprise to me and I have to thank all players I have been working with last year” says the coach who is currently on duty for SVS Post SCHWECHAT in Austria.

Detailed standings of the “Player of the year” award