Volleyball stretching exercises to improve your performance and do away with volleyball injuries for good. 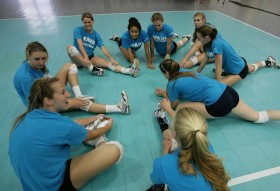 Volleyball originated in the United States in 1895, when William G. Morgan, who was an instructor at the Young Men’s Christian Association (YMCA), was looking for a game to blend basketball, baseball, tennis, and handball for his classes of businessmen. He wanted a game that would demand less physical contact than basketball. His invention, at that time called mintonette, borrowed the net from tennis and raised it to 6 feet 6 inches off the ground. This put it just over the head of the average man.

If you’re looking to improve your volleyball game or just seeking to prevent volleyball injuries it is important to follow the information in this article. In addition, adding a few simple stretches to your fitness program will also help.

When Morgan organized a demonstration game, someone commented that the players were volleying the ball over the net and that “Volleyball” might be a better name for the new sport. The first game of volleyball was played on July 7, 1896 at Springfield College. By 1900 a specially designed ball was used for the sport. At that time the YMCA began spreading the sport to Canada, the Orient, and the Southern Hemisphere. It continued to spread over the globe in the early 1900s, and in 1913 a volleyball competition was held in the Far Eastern Games.

In 1916 an offensive style of passing the ball with a high pass to be struck downward by another player was introduced in the Philippines. The Filipinos also developed the “bomba” or kill, and the hitter was called a “bomberino.” Also in 1916, the YMCA invited the NCAA to help edit the rules and asked for help promoting the sport. It was introduced into school and college physical education programs, and became an intramural sport.

In 1920 the three hits per side and back row attack rules were implemented. And in 1922 the YMCA sponsored the first national championship in Brooklyn, NY. In 1928 the United States Volleyball Association (USVBA, which is now USA Volleyball) was formed and the first U.S. Open was played.

The sport continued to grow with international interest and many international competitions played. The Association of Volleyball Professionals (AVP) was started in 1983. A year after celebrating its one hundredth birthday, the sport of volleyball saw its fledgling, beach volleyball, accepted as an Olympic sport. Today there are an estimated 800 million volleyball players worldwide, who play the game at least once a week.

Volleyball requires a lot of jumping and quick, explosive movements to react to the ball. Good spatial and body awareness is required, as well. While continuous movement is not a part of the game, good overall conditioning and endurance is needed to continue to jump and move throughout the game.

A strong base, legs and hips, as well as explosive lower leg strength is needed to jump and move for the ball. Strong shoulders are needed for the various overhead shots. Good strength in the core muscles helps with balance and control. A strong back will also protect from twisting or hyperextension injuries.

Strong, explosive muscles will help the volleyball player move to the ball and jump for spikes and blocks. A good overall conditioning program will help the player avoid injuries and play above the net.

Register on our site and get a...

The Game Will Find a Way (PHOTO)

Are you ready for Grand Finals? Milano...