Following a dramatic second day of action in the World League Finals, the heat is still on as Canada and Brazil prepare to go head-to-head in the first of two matches in Mar del Plata on Friday. Still riding high on its win against Bulgaria yesterday, Italy will then take on hosts Argentina in the second match of the day. 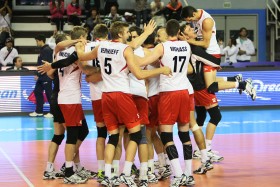 Canada is hoping to celebrate

Brazil – nine time World League winners – will be looking to avoid elimination following their loss to Russia on the opening day. And Team Canada seem poised to give them a run for their money after pulling off one of the biggest wins in their history on Thursday defeating Olympic champions and world no. 2 Russia. Victory against Brazil will guarantee that Canada will win Pool E and book its place in the semifinals.  Brazil and Canada have played 16 times in the World League with Brazil holding a commanding 13-3 edge.

After defeating Bulgaria in its first match on Thursday, Italy can secure top spot in Pool C and a spot in the semifinals if they beat Argentina on Friday. With Argentina having lost their opening match to Bulgaria  on Wednesday, they need to defeat Italy to force a three-way tie in Pool D as a loss would see them eliminated from the tournament.

In overall World League play, Italy holds a 9-5 advantage over Argentina, with two of those 14 matches taking place in the Final round.

WL: Jovović and Kovačević – “We dropped...