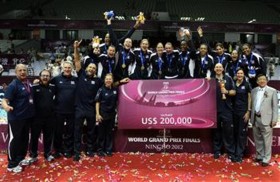 USA have won the title three years in a row and are aiming for an unprecedented fourth straight title.“Our players did a good job,” USA coach Karch Kiraly said. “We have a young team that is learning a lot this season. I am also learning a lot. It is my first season as head coach and Russia has a very good team. Tomorrow, I expect a really tough game against Poland, but we have to keep improving.”

The pace of the Americans’ game impressed Russia’s head coach Iury Marichev: “The United States have a very fast game. Many of our players had never seen a game as fast as the American one, especially our middle-blockers.”

The Netherlands and Cuba kicked off the 2013 World Grand Prix in Macau, with the Dutch team winning 3-0.

“We were very excited to play the first match in the Grand Prix and could not wait to start the games,” said Netherlands coach Gido Vermeulen. “Our team played with very good discipline, good serve and good blocking strategy.”

Three teams made their debut in the World Grand Prix on Friday: Algeria, Bulgaria and the Czech Republic.

Only the Czechs were able to make a winning start, defeating Puerto Rico 3-0. Algeria lost 3-0 to last year’s bronze medallists Turkey, while Bulgaria fell to China by the same score.

The action continues on Saturday with another 10 matches.