he venue of this year’s final four in the 2012 CEV Volleyball Champions League, the splendid “Atlas Arena”, is already sold-out for the weekend and hence some 25'000 Volleyball fans will have the opportunity to attend the Volleyball event of the year where the home guys of PGE Skra BELCHATOW will try to stop the winning streak of Italy’s TRENTINO Volley. 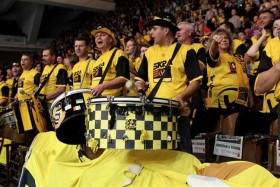 Volleyball fever is spreading around in Lodz as final four approaches

“We still receive many inquiries for tickets but unfortunately the sports hall is already sold-out” says club President Konrad Piechocki. “Only three hours after we launched the ticketing on the Internet, more than 5’000 tickets were already gone. This final four is the second most important sports event of the year here in Poland, being surpassed only by the UEFA Euro 2012 that our country will jointly host together with our neighbors from Ukraine. There is a huge interest also among the VIPs” stresses Mr. Piechocki.

The media are also extensively dealing with the final four: today “Przeglad Sportowy”, Poland’s most popular sports newspaper – one of the oldest of that kind in Europe having been founded in 1921 – has delivered a special issue totally dedicated to the Champions League finals with photos and exclusive reports. The same is being done by “Dziennik Lodzki”, the most popular daily in Lodz, which is contributing tons of news about the final four to its readers.

Additionally, as per the figures contributed by CEV partner the sportsman media group the final four will enjoy a terrific TV coverage, with the last and deciding act scheduled for Sunday to be broadcasted – live or delayed – in a total of 67 countries in Europe plus 37 more in Asia and in Oceania via the cooperation established with Eurosport Asia.
A detailed TV schedule is available here (see Downloads box), do not forget to check also the live streaming – with English commentary – that will be provided by LAOLA1.tv!

Can Team Japan Make a Splash as...

Libero decided to attack and… (VIDEO)