The always splendid “Atlas Arena” played host this afternoon to a press conference whereby the highest authorities of the Lodz Voivodeship did all express their full support to the hosting club, PGE Skra BELCHATOW, with only a couple of days to go before the start of the Volleyball event of the year here in Poland. 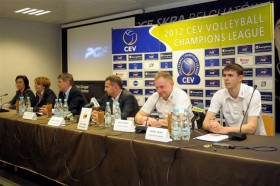 “We are happy that the city of Lodz is hosting such a great event: this is the right prologue to the UEFA Euro 2012 that will turn into an unforgettable experience for Poland as well as Ukraine. This nevertheless is coming up only next June, so for the moment all Volleyball fans just can’t wait for the final four of the CEV Volleyball Champions League” states Mr. Witold Stepien, the Marshal, i.e. the leader of the executive of the Lodz Province. “And I also hope that the name of our voivodeship will appear on the jerseys of PGE Skra BELCHATOW starting from the next season, as this would be the best way to promote, also internationally, our neighborhood” he adds.

The Lord Mayor of Lodz, Hanna Zdanowska, also backs up the special involvement showed by the local authorities in this final four: “We are just about to build another sports hall which will serve as training hall for the 2014 FIVB World Championship that will take place in Poland and also here in Lodz. It will be built right next to the Atlas Arena, so that also the club of PGE Skra will benefit of this facility. I am going to attend the final four and support our team from the stands. PGE Skra is a unique atout for us as this team provides our people with the opportunity to attend a world-class Volleyball weekend”.

Mrs. Dorota Idzi, a member of the Board of Directors of PGE (Polska Grupa Energetyczna), the main sponsor of the hosting club as well as of this final four, concludes: “We have been together with Skra for some 20 years and we can only be proud of what they have achieved so far, the head coach as well as all the players. This partnership shall and will continue”.