Many VIPs are expected to attend this weekend the final four of the 2012 CEV Volleyball Champions League at “Atlas Arena” in Lodz, including Poland’s Vice Prime Minister Waldemar Pawlak, who will for sure join the many local fans on Sunday but may show up also for the semifinals scheduled for Saturday afternoon. 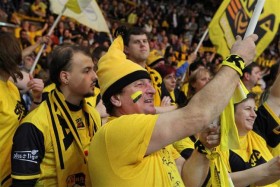 The politicians are attending the event that massively that some jokes are circulating in Lodz saying that the country’s Parliament may have a session directly at “Atlas Arena” reaching the quorum that is required to pass a law.
Anyway, the local organizers are working hard to deliver a memorable event and a couple of days ago finalized also the official website of the final four which all Volleyball fans can retrieve via this link
Additionally, the Marshal of the Lodz Voivodeship, Mr. Stepien, announced this afternoon his intention to support a special program for the next summer holidays whereby the players of PGE Skra BELCHATOW shall visit some of the Volleyball courts that will be set up across the province to accompany the local children as they learn the ABC of the sport. So far this project was mainly devoted to football, basketball and handball, but the Marshal stressed that Volleyball will also get a certain priority in the near future.
Moreover, the players of the junior team of PGE Skra BELCHATOW that recently finished second in the so-called “Młoda Liga” will enjoy a moment of glory on Sunday in front of some 14’000 fans as they will receive special medals and awards for their great campaign in Poland’s youth division.