The city of Lodz, and all the fans of the volleyball cannot wait for the beginning of the Men's 2012 Volleyball Champions League Final Four. Nearly 25'000 spectators will have a chance to support from the stands the best athletes of the world. 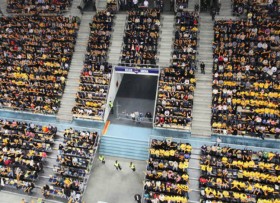 We still receive many enquiries about the tickets. It is a great pity, but we cannot help them. The tickets are sold out’ states the President of PGE Skra Belchatow Konrad Piechocki. Three hours after the opening of the Internet sale, nearly 5’000 two-day tickets had been sold. The Final Four in Lodz looks like the second biggest sport event in Poland in the first 6 months after the football 2012 European Championships, which will take place in Poland and Ukraine. The huge interest among the vips also indicates, how important event for the Polish sport is just about to begin.

Thursday is also another day of the special issues of the biggest dailys, devoted to Final Four. ‘Przeglad Sportowy’, the biggest Polish sports daily, one of the oldest in Europe (founded in 1921) prepared its special issue with the photos and exclusive reports. Also ‘Dziennik Lodzki’, the most popular daily in Lodz, served its readers the huge amount of news about Final Four.

TOP 5 most watched videos in WoVVideo