Lodz, Poland, March 18, 2012. The multiple champions of TRENTINO PlanetWin365 could eventually save their honor at the final four of the 2012 CEV Volleyball Champions League: although they failed to claim a poker that would have been something unique in Volleyball history, still they could seize the classification match with Arkas IZMIR in straight sets (25-20, 25-19, 25-19) and hence medal for the fourth consecutive season in Europe’s most prestigious league. 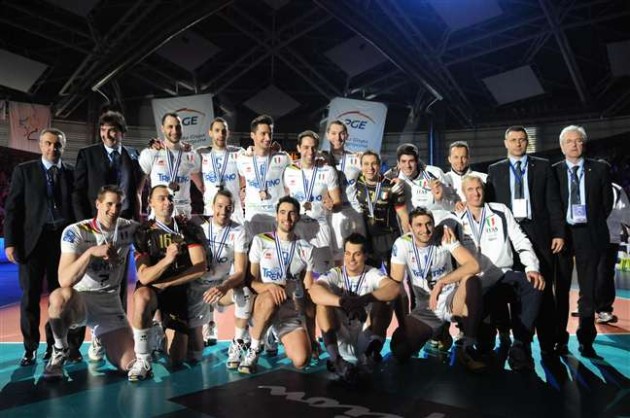 It was definitely a totally different performance than in yesterday’s semifinal for the group of Matey Kaziyski even though Arkas IZMIR did also not play its best thereby accelerating the triumphal march of the Italians in front of a fully packed “Atlas Arena” in Lodz.

After its unique winning series was stopped yesterday in the semifinals by Zenit KAZAN, the guys of TRENTINO PlanetWin365 definitely wanted to get rid of that major disappointment and defend their pride going at least for bronze to round out their European campaign for this season.

On the other side of the net, Arkas IZMIR – the very first team from Turkey competing in the final four of the men’s Champions League – had nothing to lose and hence the game was likely to be the well deserved prologue for the last and deciding act starring the home heroes of PGE Skra and Zenit. The always magnificent “Atlas Arena” was not yet fully packed by the time these sides had started their quest for the third place but still quite many supporters of PGE Skra – as usual dressed with their yellow and black jerseys and additional gadgets – had already found their way to the venue of the Volleyball event of the year.

The game started with TRENTINO setter Raphael immediately searching for Osmany Juantorena, one of those players who really had not lived up to the expectations in the semi with Zenit; the Cuban-born star will be leaving TRENTINO by the end of this season and yesterday was heavily criticized by all Italian media, but still the 350 fans from Trento in attendance did not leave their hero alone as they quickly started up encouraging and accompanying him with their usual and “fully customized” choruses. And Juantorena eventually paid back by calling for the first mandatory stop of the opening set with a great spike from the wing (8:7). It looked like the nephew of Alberto Juantorena, a double Olympic champion from 1976 in Montreal, had found himself again (11:8) but actually the Italian “machine” was generally working much better than it did yesterday, with more consistency in all fundamentals, especially in serving and defense (15:11). Arkas helped the Italian champions with some unforced errors and the winners of the past three editions could comfortably and quickly wrap it up with the score of 25-20 that was sealed by a serving error of Arkas opposite Liberman Agamez.

TRENTINO showed off its class also in the opening of set 2 with a massive 7:1 break that did already set the tone for what was going to follow. The group captained by Matey Kaziyski did literally dominate the scene in every aspect of the game while Arkas lacked consistency and this helped widen the gap more and more, with the margin standing at 8 points by the second technical time-out. Setter Raphael was well mastering all of his attackers, by alternating the middle blockers – Djuric and Birarelli – with the great wing duo composed by Kaziyski and Juantorena, while Czech opposite Jan Stokr was also playing with a good efficiency ratio. By the end of the set head coach Radostin Stoytchev even opted for a couple of substitutions, with the second diagonal Lukasz Zygadlo and Tsvetan Sokolov joining the game and this did not affect much the development of the game even though Arkas attempted a kind of comeback as TRENTINO evidently lost focus before the Italians finished it with an attack of their young Bulgarian opposite (25-19).

The 2009, 2010 and 2011 club world champions got back to their usual starting six for the opening of set 3; the difference having been made in the second set by a tremendous efficiency in offense for the Italians (70% vs. only 41% for IZMIR), the score stayed initially close in the following section of the game, with TRENTINO even losing an attempt to challenge a decision of the referees via the so-called “video verification system”. The Italians had nevertheless gone to the front by the first technical time-out (8:6) and they confidently imposed their play (14:8); the bronze medal was – that is clear – not really their goal in this final four, but still they evidently celebrated this result as another chapter in their history being unanimously seen as the strongest Volleyball club of the past decade.

“I do not have much to say about this game” said Stoytchev, “I am happy that we have medaled once again even though the color has changed in comparison with the last seasons. We still have a lot to work for the remainder of the season and I hope we will get together once again next year for another final four”.

“I think that was a great experience even though we did not win a game here” stressed Arkas mentor Glenn Hoag. “Today we lined up some young players so that they could also have the chance to experience some high-class Volleyball and play against some of the best in the world. As for the game, TRENTINO pressured us a lot with their service which they are famous for and we could not cope with this”.