Baku, Azerbaijan, March 23, 2012. The capital city of Azerbaijan, Baku, is currently bidding to host the 2020 Olympics and even though this may sound a little ambitious, actually this is definitely one of the most dynamic and fastest-developing areas of the “global village” and so Azerbaijan’s dream is to be taken very seriously by all other candidates. Once you make it to Baku, and straight upon landing at the international airport named after the late Head of State, Heydar Aliyev, it looks like everything is being renovated, expanded, and the rhythm is so hectic as if Azerbaijan had embarked on a quest to catch up with the time that was lost through the decades of the “Cold War” and under the Soviet authority. 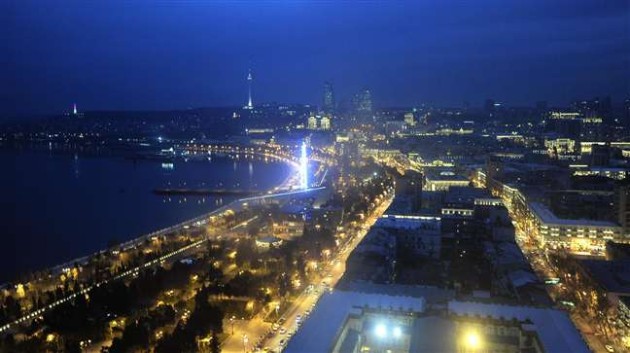 Baku is an enormous construction site where many different styles and traditions all find their own place, with this re-styling and expansion being evidently supported and powered by the revenues stemming from the oil industry. Azerbaijan is about to host the 2012 edition of the Eurovision Song Contest scheduled for late May and the authorities have foreseen a special arena with a capacity of 16’000 specifically for this purpose.

The country and the city are quickly changing their look but something still remains in the heart of all local people: sport. Azerbaijan has a long tradition in quite many Olympic disciplines – such as wrestling, judo, weightlifting, or gymnastics – and once contributed quite many athletes to the Soviet teams that regularly topped the medal charts at the Olympics as well as at their respective World and European Championships. As for Volleyball, one of the most famous players from the late ’60 and early ‘70s, Inna Ryskal, a double Olympic champion with the Soviet Union in 1968 and 1972, was born in Baku but the sport has drawn pretty much attention only in the last decade, in combination with the great development experienced by the national team placed under the constant guidance of Faig Garayev.

The seven clubs – 5 based directly in Baku and 2 more from its outskirts – participating in the women’s Superleague have been joined by more and more foreign players, attracted by lucrative contracts and also by the ambition of the local officials whose intention is to make Azerbaijan a real “Mecca” of this sport, thereby contributing also to the development of the local youngsters and home-grown stars. This has already resulted in Rabita BAKU finishing as runner-up of last year’s Champions League and winner of the 2011 FIVB Club World Championship in Doha, Qatar, and even though none of the Azeri teams – Rabita and Azerrail – did eventually qualify for the final four, still some 7’000 fans are supposed to find their way to the sports hall to watch out for the actions of the finest Volleyball players out there.

RC CANNES of France and Italy’s MC-Carnaghi VILLA CORTESE will open the program of the semis on Saturday (at 4:30 local time, 1:30 CET) to be followed – 3 hours later – by the clash starring two real giants, i.e. Turkey’s Fenerbahce Universal ISTANBUL and Dinamo KAZAN of Russia. The club from the French Riviera did already seize the trophy of Europe’s most elitist competition back in 2002 and 2003, while Fenerbahce did settle for silver and bronze in the last couple of seasons. As for VILLA CORTESE and Dinamo, this is their first appearance in the final stage of the competition, with KAZAN having the unique chance to double up the win of the guys mentored by Vladimir Alekno in the men’s final four held last week in Lodz, Poland.

All Volleyball fans are invited to join this great show, by following the live streaming of the matches provided by LAOLA1.tv, the live gallery which will be available here throughout the weekend and the TV transmission – live or delayed – that is going to cover a total of 101 countries and territories worldwide. Stay tuned up to Sunday evening to get to know the name of Europe’s next queens!

PHOTO OF THE DAY: The most loyal...