Baku, Azerbaijan, March 23, 2012. With Baku playing host this weekend to the final four of the 2012 CEV Volleyball Champions League – Women, the CEV Executive Committee also got together in Azerbaijan’s capital city to discuss all items related to the many Volleyball and Beach Volleyball competitions scheduled for this year. 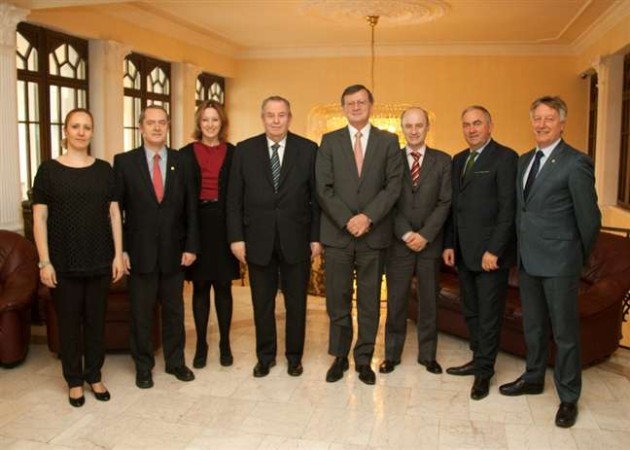 The reports of the inspection visits carried out a few weeks ago for the final rounds of the 2013 CEV Volleyball European Championship that will be jointly hosted by Denmark/Poland (men) and Germany/Switzerland (women) were carefully analyzed by the members who did also give their green light for the start of the bidding process whereby all National Federations are invited to drop their candidatures to organize the next European Championships scheduled for 2014 (junior) and 2015 (senior and youth).

Additional attention was devoted to the latest updates provided by the hosting countries, Turkey and Bulgaria, of the Olympic qualifiers whereby one European team per gender will eventually pocket a pass to join the starting field of the Summer Olympiad coming up later this summer in London.

While the state of the preparations for all remaining Volleyball and Beach Volleyball was evaluated, the CEV Executive Committee did also finalize the strategy and general concept of the regional development centers that are likely to be open in the near future.

Their goals, tasks and strategic value were clearly defined by the Executive Committee chaired by CEV President André Meyer, so following up the recent establishment of a Development Department that will be coordinating the operations and functioning of such “hubs” from the CEV headquarters in Luxembourg.