Baku, Azerbaijan, March 23, 2012. “We are very glad to host these great teams here in Baku as our country is celebrating the festivities known as Navruz, i.e. our New Year’s Day. You are all warmly welcome to Azerbaijan” said Mr. Elshan Ismaylov, the Secretary General of the Azerbaijan Volleyball Federation at the Technical Meeting that tonight did officially open a weekend of world-class Volleyball in Azerbaijan’s capital city. “We are doing our best for you to enjoy the highest standards for this competition which means a lot to our country even though no team is representing Azerbaijan in the final four” he continued. 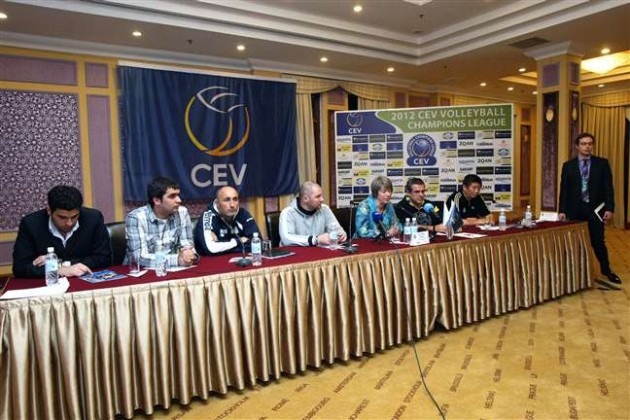 Coaches are confident a great Volleyball show will unfold in Baku

After Mrs. Riet Ooms, President of the European Cups Commission and CEV Supervisor, recalled that the winner will be also booking a trip to the 2012 FIVB Club World Champs scheduled for next October in Doha, Qatar, the coaches of the four participating teams shared their feelings and yes, emotions, right before the start of the real highlight of this Volleyball season.

“This was a great adventure so far and we are more than happy to compete in this final four” said Marcello Abbondanza, the mentor of Italy’s MC-Carnaghi VILLA CORTESE. “I think it is nice that four teams representing as many countries are competing here in Baku, this brings even additional flavor and it is a nice portrait of the current state of Volleyball in Europe”.

“It is always a pleasure to come to Azerbaijan; we were here some weeks ago as we played Azerrail in the 1/4 finals” added the head coach of Dinamo KAZAN, Rishat Gilyazutdinov, “and here everyone enjoys a perfect atmosphere, surrounded by a great passion for Volleyball. Our team is in a good shape and we hope to get a good result”, he singled out bearing in mind that the guys of Zenit took last week the men’s competition in Lodz, so his club may go for what would be a historic double.

Brazilian Zé Roberto, who is competing in his second consecutive final four while being at the helm of Fenerbahce Universal ISTANBUL, first congratulated all of his colleagues for having made it to the top of the European elite and stressed: “Everyone who is here is a top team but our goal is to play our best in order to bring home the trophy after Fenerbahce missed this chance two years ago and last season too”.

The Chinese mentor of RC CANNES, Yan Fang, concluded: “Some 10 days ago one of our players got injured but we are motivated and hoping to go for the best result here in Baku”.

All in all his club is the only one among those participating in this final four that did already come out on top of Europe, doing so with back-to-back victories in 2002 and 2003. The many Volleyball fans from the French Riviera hope this final will bring back such great memories and add another trophy to the already impressive showcase of the team captained by Georgian-born Victoria Ravva.

ESP M: Almeria of Molducci lost in 3. game of semifinals