Baku, Azerbaijan, March 25, 2012. The “yellow angels” of Fenerbahce finally fulfilled their dream and delivered a terrific show in the final match of the 2012 CEV Volleyball Champions League in Baku downing France’s RC CANNES in three straight sets (25-14, 25-22, and 25-20). Their supremacy was overwhelming and there is a name that all Volleyball fans will have to get quickly familiar with: Korean Kim Yeon-Koung anchored her side to a historic win and will be remembered as the real star emerging from this final four whereby “Fener” becomes Turkey’s second club to claim the most prestigious club competition after their compatriots of Vakifbank had done so last year in Istanbul. 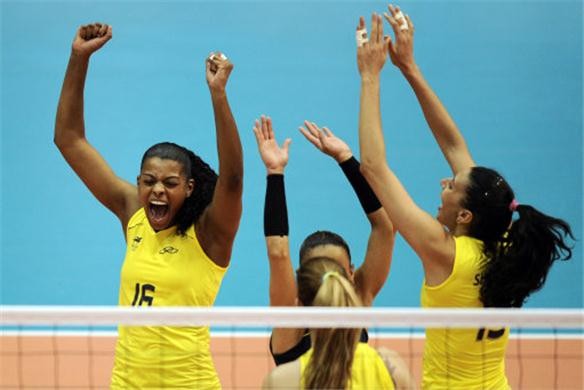 Some four months after the start of a long and very demanding campaign, the top teams emerging from such an incredible adventure were supposed to deliver a classy Volleyball show as the title of Europe’s queens was to be assigned this afternoon in Azerbaijan’s capital city. In a repetition of what was already seen on Saturday’s semifinals, the “Heydar Aliyev” Sports and Concert Complex got gradually crowded by the many fans of Fenerbahce, all wearing – once again – their black and yellow scarves to contribute a pretty homogeneous look and feel in Azerbaijan’s largest sports hall. After barely missing their call in 2010 and having to settle for bronze last year as the final four was held in Istanbul, the players coached by Brazilian Zé Roberto were expected to profit of this chance to finally come out on top of the standings but their rivals of RC CANNES certainly were not going to let it go that easily. Additionally, this final match was a remake of the semi played two years ago in Cannes and whereby Fenerbahce had literally shocked the local fans by seizing the day after a tie-break whose memories are still well alive there in the French Riviera.

The final match was officiated by a duo of female referees – Zorica Bjelic of Serbia and Germany’s Heike Kraft – and the atmosphere was evidently “hot” especially as the fans of Fenerbahce never stopped supporting their heroines with their choruses. The first rallies immediately set the tone of what was going to follow with continuous side-outs and the score remaining extremely tight. RC CANNES was the first to clip a margin of two points (9:7) but the “yellow angels” stormed back immediately anchored by their stellar Korean opposite Kim Yeon-Koung. Apparently Fenerbahce was not feeling the enormous pressure resulting from the “obligation” to win and another attack of Kim helped stretch the margin up to three points (14:11). The French ladies displayed some great defense but it was not that easy to stand the quality and intensity of the play delivered by the Turks who were dictating the tempo of the game also by the second mandatory stop (16:12).

After a fantastic performance in yesterday’s semifinal with Dinamo KAZAN, Kim was once again on a class of her own: a crosscourt, an ace and a great defense of the Korean star seized the next 3 points for Fenerbahce (20:13) that was rapidly sailing away while the Chinese-born mentor of RC CANNES, Yan Fang, was getting visibly nervous as his players were losing focus and looked unable to stand that terrific storm. Another ace of Kim moved the count up to 23:13 and Brazilian middle blocker Fabiana Claudino wrapped it up only a few seconds later for the 1:0 (25-14).

That tremendous show of strength continued also in the second set (3:1) where Kim re-opened the gap for Fenerbahce moving the score from 10:9 to 13:10. RC CANNES played bravely enough to be able to fight back and make it a little bit more even and exciting (17 all). However, the personal show of Kim continued as the final rush of the second set was quickly approaching (21:17) and even Nadia Centoni had to crash against the wall of Fenerbahce block, with Eda Erdem being well supported in this fundamental by setter Naz Aydemir. It was not by chance that Fenerbahce had edged – with two wins in straight sets – the 2011 club world champions of Rabita BAKU in the 1/4 finals: the ladies in yellow jerseys were just an express that was running at full speed straight to the final station of this journey, with a pipe of Kim significantly finishing it off – at least for the second set – with the score of 25-22.

Quite understandably Fenerbahce suffered a drop of concentration in the opening phases of set 3 (0:3) but that chase did not last that long with Logan Tom eventually moving her side to the front as she killed a great spike from the left wing (9:8). It looked like Fenerbahce – after winning the FIVB Club World Championship in 2010 – was going to follow the compatriots of Vakifbank on top of Europe’s Volleyball elite; the supporters from Turkey’s megalopolis had already started their party on the stands as the score stood at 15:13 for their heroines after Kim had displayed some more magic with a delicious lob to avoid the French block and surprise the defensive line of CANNES. All stats were clearly speaking in favor of Fenerbahce and another pipe of Kim followed by a fast of Erdem paved the way with gold for the Turks (19:15). Turkish music was being played at “Heydar Aliyev” sports hall as Fenerbahce was missing only four points to fulfill its dream and a sort of countdown started as Erdem aced for the 22:17. Yan Fang tried out many substitutions but this final remained one-sided up to the very end, with the well-deserved 3:0 being sealed by an attack of – guess – Kim Yeon-Koung, MVP and absolute star of this final (25-20).

RUS W: Victory for Fakel of Gioli and Del Core