Shortly before the start of the semi-final matches scheduled for Saturday afternoon at Baskent Volleyball Hall, CEV President André Meyer paid a short visit to another Volleyball facility in Turkey’s capital city to have a closer look at the so-called Fabrika Voleybol. The Turkish Volleyball Federation has indeed initiated a special project to involve children aged from 6 to 12 in the sport with a focus on Anatolia, an area where there is still much room for improvement in comparison with the standards achieved by the Eurasian megalopolis of Istanbul. 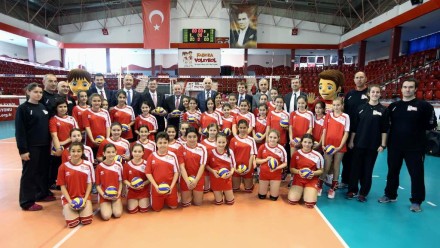 Mr. Meyer was accompanied by CEV Senior Vice-President Aleksandar Boričić, former Volleyball star and Volleyball Federation of Serbia Vice-President Vladimir Grbić and by CEV Marketing Advisor Zoran Avramović. The delegation was guided around by the President of the Turkish Volleyball Federation Özkan Mutlugil and warmly received by a few dozens of young girls. “I was told that this project started only four months ago but it has already attracted hundreds of children who are learning the ABC of our sport,” Mr. Meyer said. “I can only congratulate the Turkish Volleyball Federation on this concept which will certainly help shape the future of our sport in this country.”

The CEV President distributed mini volleyballs to the children who all looked just thrilled by the visit of such high-profile guests. Mr. Mutlugil introduced the CEV authorities to a group of young girls attending special classes of the so-called Fabrika Voleybol at the Selim Sirri Tarcan sports hall. The kids also got to know more about Vladimir Grbić, a former Olympic and European champion, who is also an advocate of the CEV “Fair Play – Volleyball Way” campaign. Grbić addressed the audience in Turkish, for he spent the last seasons of his long career in this country, playing for the likes of Fenerbahce, winning the national league and showcasing his skills also in that same hall where the girls were enjoying their Volleyball experience on a sunny Saturday morning.

The Fabrika Voleybol is the latest action set up by the Turkish Volleyball Federation in order to support the development of the sport across the country. There are currently three hubs – located in Ankara, Izmir, and Bursa – where a total of 679 children are getting to know Volleyball at a very tender age. This way the Turkish Volleyball Federation hopes to lay the foundations for the continuation of their success story in all age groups where Turkey’s national teams have marched from triumph to triumph in recent times.

The 11-year old Dilara Datli was among those who got to enjoy the visit of the CEV delegation: “Volleyball, together with swimming, is my favourite sport. I have started playing only one and a half months ago but I just love it,” she says. “My favourite players are Neslihan Demir and Mustafa Koc who play for Eczacibasi and Arkas respectively.” Last year she attended – together with her parents – the final match of the CEV Volleyball Cup where Halkbank ANKARA edged past Italy’s Andreoli LATINA to claim their most prestigious international accolade so far. Maybe one day she will turn into a professional player, and follow in the footsteps of the Volleyball giants who this weekend will be battling it out for the title of the 2014 CEV DenizBank Volleyball Champions League.

CL M: Belogorie one step away from European glory