CEV CL: Generali UNTERHACHING is ready for away match with CESKE BUDEJOVICE

Munich, Germany, December 11, 2011. Germany’s Generali UNTERHACHING seems well prepared for its third match in Pool D of the 2012 CEV Volleyball Champions League coming up on Tuesday with the Czechs of Jihostroj CESKE BUDEJOVICE. 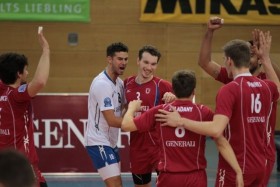 Nine days after Generali UNTERHACHING shocked the BERLIN Recycling Volleys on their home turf with a stunning 3:0 victory in the German Bundesliga the two teams met again this Saturday at “Generali Sports Arena”. At stake was a trip to the semifinals of the German cup which the team from the outskirts of Munich has ruled for the last three seasons.

It was a quarterfinal match worthy of a final. After the loss at home nine days ago BERLIN’s coach Mark Lebedew had made changes to the lineup to surprise his counterpart Mihai Paduretu, going with Hawaiian Kawika Shoji for regular setter Jaroslav Skach. But the switches came to no surprise for UNTERHACHING.

“We had Lebedew expected to change something. He was forced to do so after the loss at home. We had analyzed Shoji’s game and we were prepared”, Paduretu’s assistant Frank Kohlmann said after the game.

The match was played on an extremely high level with a lot of long and spectacular rallies.

“BERLIN really put up a fight”, Kohlmann stated. In the first set the hosts couldn’t muster a convincing lead, but in the end UNTERHACHING was more effective when it counted, making the big points. However, it wasn’t until the third set when the Recycling Volleys slowly started to break down. After a 4:1 lead for BERLIN, Generali won six points in a row and with that set the tone for the remainder of the match. The visitors never gave up, but it seemed clear after that that they wouldn’t come back against a powerful and very concentrated UNTERHACHING side.

“BERLIN was very strong; for the first time this season we felt constant pressure but we succeeded as a team. The result looks clearer than the game was”, Christian Dünnes said.

Captain Max Günthör added that “two great teams showed some spectacular Volleyball”. There is no vote for a MVP in German cup competition but all of Paduretu’s starters contributed perfectly to the win: libero Sebastian Prüsener had another strong performance as had Fredy Cedeno and Denis Kaliberda, Günthör even scored more points this time than Dünnes. Alex Shafranovich was substituted for Robert Hupka because of some back pain.

The semifinal is to be played on December 26 or 27 at TV BÜHL which just a couple of days ago lost to UNTERHACHING 0:3 in the Bundesliga. Kohlmann called it a good draw and stated: “We want to get to the final again”.

However, on Tuesday Generali has to show its spectacular form in the 2012 CEV Volleyball Champions League by playing Jihostroj CESKE BUDEJOVICE first. After losses to Bre Banca Lannutti CUNEO and Stade Poitevin POITIERS the Bavarians already face a must-win situation.

“On paper we seem to be the favorite”, Dünnes says with all the confidence gathered with the wins against German opponents. However, he doesn’t take the team from the Czech Republic lightly.

“A team that wins in Cuneo must be a good team that we must take seriously”. Paduretu’s assistant Frank Kohlmann added: “We won’t make the mistake of underestimating this opponent. We have analyzed the play of the Czechs and our team will be well prepared”.

Christian Dünnes even claims that the pressure after two losses in Pool D play would be a benefit for his team.

“We have already shown in the games against BERLIN that we can deal with pressure. In these games the concentration is high and we play hard”.

Frank Kohlmann wants Generali to gather five points from the two encounters with CESKE BUDEJOVICE, the second game set to be played on December 21.

“We need to get five points from these two matches, otherwise reaching the knockout stage will be very difficult” he concluded.

Second home match for Atom Trefl coming up on Tuesday

Improve your jump with training in swimming...