Second home match for Atom Trefl coming up on Tuesday 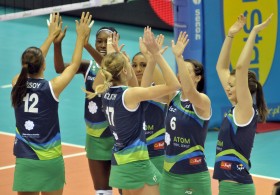 SOPOT is currently ranked third in Pool C with 2 points, with the standings being topped by Russia’s Dinamo KAZAN (5) followed by Volero ZÜRICH with 4. The Czechs round out the charts with 1 point from the previous two rounds of action.

Atom Trefl has to cope with a very tight schedule this month playing almost every three days as the European campaign is running together with the national league. SOPOT is the provisional leader in the PlusLiga and on Saturday played AZS BIALYSTOK, i.e. the team that is currently ranked last, and hence initially lined up only home players with the foreign stars enjoying some rest.

However, similarly to what had happened one week earlier with Stal MIELEC, the second lines were not able to deliver a strong performance, losing the first two sets (21-25, 22-25). Head coach Alessandro Chiappini was forced to ask for the contribution of US American Megan Hodge, Turkey’s Neriman Özsoy and Germany’s Corina Ssuschke-Voigt, thereby seizing the third set with the massive score of 25-5, a record in this year’s national league. The final outcome of the match was nevertheless determined only after a close tie-break, where SOPOT trailed 11:13 before scoring the next four points to finally take home the match.

“I am very angry especially as we caught such a very bad start” says team captain Izabela Belcik.

“We play with that same line-up during our training sessions and there we may beat anyone, so I do not know why it happened again. I hope we will quickly get rid of such problems” she adds.

SOPOT is still on top of the standings but lost one point via this 3:2 win and next Sunday they will have the toughest challenge brought by defending national champions and Champions League contenders of Bank BPS Fakro MUSZYNA. Most probably the match with PROSTEJOV won’t see any Polish player in the starting six with Alisha Glass, Margareta Kozuch and Amaranta Fernandez joining the above mentioned foreign trio as they already did for the previous matches with Volero and Dinamo KAZAN.

VK Modranska will travel to Sopot already on Monday morning with the complete roster including the best scorer from the two rounds so far played in the Champions League, Sanja Popovic of Croatia. The two sides know each other pretty well as last year they played some friendly matches and PROSTEJOV hasn’t changed much its composition from the 2010/2011 campaign. It will be a special match for Corina Ssuschke-Voigt as the German middle blocker was transferred three months ago from Modranska to SOPOT.

CEV CL: Generali UNTERHACHING is ready for away match with CESKE BUDEJOVICE