Pre-tournament favourites Cuba and the Dominican Republic are set to clash for the only ticket to the 2012 London Games available in the NORCECA Women’s Continental Olympic Qualification Tournament in Tijuana. 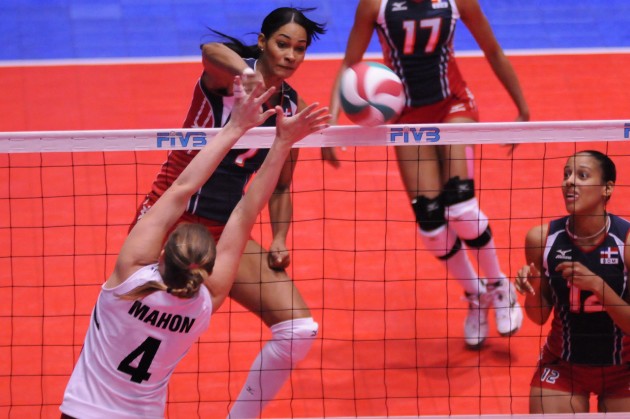 The title match is scheduled to start at 19:00 (local time) with the bronze-medal match between Puerto Rico and Canada at 17:00. Earlier, Honduras will play Trinidad and Tobago for seventh place, followed by Mexico against Costa Rica for fifth position.

“Our serves were the key to victory,” Cuba’s coach Juan Carlos Gala said. “We started attacking very well down the middle and finished up from the corners. It was a tough battle because Puerto Rico have many experienced players and they play good volleyball.”

“The Dominicans reached the finals after playing in a more complicated pool, but as I said, since the beginning we came here to battle for the victory and the ticket to London.”

“It was our best match of the tournament,” Dominican Republic coach Marcos Kwiek said. “The relationship between our block and defence worked almost perfectly and we also served very well.”

“Playing against Cuba is tough and even though we have players with more experience, that’s a match you also have to play with your heart.”

Cuba finished fourth at the Beijing Olympics after taking the bronze in Athens 2004 following three consecutive gold medals (Barcelona 1992, Atlanta 1996 and Sydney 2000). They have taken part in eight editions of the Summer Games. The Dominican Republic finished in 11th place in their only participation at the Olympics in 2004.

Cuba led 11-7 in blocking and also had the edge in serving aces, 5-4.  The winners gave away 23 points on errors and benefited from 27 mistakes by the losers.

The Dominicans dominated the match and topped the taller Canadians in blocks (8-1) and serves (3-2). The winners made 15 errors to 18 by the defeated team. Four Dominican players had double-digit scores, with Bethania De La Cruz top on 14 points. Veteran Annerys Vargas and youngster Lisvel Eve, the team’s middle blockers, each finished with 12 points and had 5 and 3 blocks, respectively. Gina Mambru tallied 11 points including the last point to seal the victory. Canada’s Sarah Pavan recorded 12 points.

Mexico saw off Trinidad and Tobago in straight sets (25-13, 25-16, 26-24) and will play Costa Rica for fifth place. Alejandra Isiordia was the best scorer for Mexico with 19 points, including four service winners and one block, while teammate Olivia Meza added eight points. Kystle Esdelle led Trinidad and Tobago with 18 points and Abigail Gloud followed with eight. Mexico edged Trinidad and Tobago 7-6 in blocks despite their disadvantage in height, but clearly established the difference in the serves category with 10 aces against two.