The middle blocker of Delecta Bydgoszcz, Andrej Wrona, had a very successful season. His excellent playing was noticed by the coach Andrea Anastasi who invited him to join the team of 25 players for the World League. 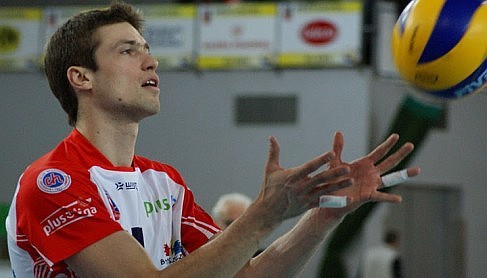 For you the season 2011/12 is the best season you have played in your career. Last year, after a good start you had to stop playing volleyball because of the knee injury. You left the club and did not played for nearly a year. However, you managed to return and even won the title of the best blocker in the PlusLiga.

“That is right. Last season I played until December. Then because of the injury I was away of the court for two months.The club gave me the support and I am very grateful for that. I will never say a bad word about the president or the board and I owe a lot to them.”

Thanks to your excellent performance in the PlusLiga, you got the offer to play among the elected  25 players of the national team. It was a big surprise?

“Yes, it was a big surprise. Generally, I did not expect that. I am glad that the coach Andrea Anastasi noticed me. It is motivating to play for the national team.”

You played in Delecta Bydgoszcz for two years. Will you stay in the club for next season?

“I have a contract valid for another season and I am not planning any changes.”

AZS Czestochowa was one of the clubs, where you spend a long time. Do you feel some affection for this place?

“Of course. However, the atmosphere in the hall Polonia it is not the same as it was in season 2007/2008. Czestochowa is one of the best teams in the league and I always return there with the sentiment. There are a lot of familiar faces and I like to play in this hall.”