Six of the eight head coaches competing at the NORCECA Women’s Olympic Qualification Tournament are born in different countries than the ones they are working for in charge of their respective national teams. 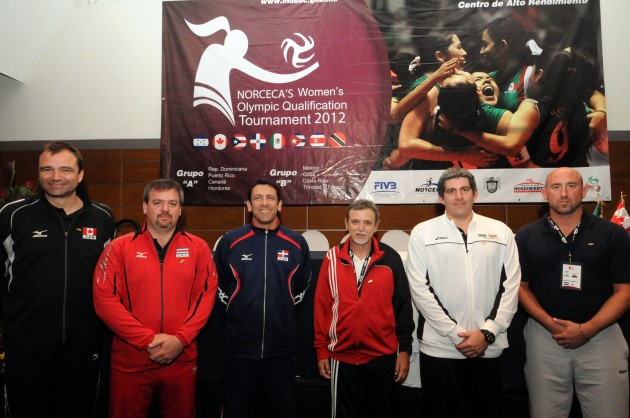 This group of experienced skippers looks forward to contribute for the best of the game in the NORCECA Continent.

Canada’s head coach, Arnd Ludwig, is from Germany, Costa Rica is coached by Argentinean Xavier Perales, American Matt Winkler is at the helm of Honduras, while Mexico lives a new era under the guidance of Estanislao Matias Vachino, who like Perales, was born in Argentina.

On the other hand, Dominican Republic has the Brazilian Marcos Kwiek since 2008 while Trinidad & Tobago has found a leader with Cuban born Francisco “Panchy” Cruz.

The only exceptions are Cuba with Juan Carlos Gala, and Puerto Rico with David Aleman, who are native coaches.

In this foreign legion, there are those who are setting a blueprint like Ludwig, who after a successful career in his country’s league for a decade, decided to have a change.

“I coached a team that won a championship and was always tough to beat. But there was not much money in Germany at that time, so I was looking for a national team, and I started to work with Canada three years ago,” Ludwig said. “The culture is a little different, but not so much different as in Mexico or some other countries like in South America, in fact is very similar to Germany. I think my team is very good, very athletic and I hope to be here for more years.”

In the case of Costa Rica, Perales said: “I have five months in charge and I feel great, there are some big challenges like seeing how the players have to divide time between their jobs and their training sessions. We have evolved but for the next tournament I look forward for the next step.”

After many years of successful work, the Dominican Republic has achieved many important goals in the American continent and the world thanks to its impressive women’s volleyball program Kwie at the helm.

“In the beginning it was a little strange for me, while playing matches against Brazil, but I decided to take this challenge, to know other countries, other cultures, and it was so important,” said Kwiek, who has won a gold medal at the Central American and Caribbean Games, and has also reached the podium at Pan Am Cups and NORCECA Championships. “It is difficult to have an exact description of what I feel, but I have known and interact with very nice people, with the support of the national federation, and I feel like living at home.”

Honduras is for the first time in a major competition with a young team, led by USA’s Winkler, who was born in the New York area. “It is fantastic, a total different culture, in a third-world country. Athletes are strong and disciplined, no matter where you go. I am excited that in Honduras that even if there is not money, this hasn’t dissuaded the girls from playing and giving their best,” Winkler said.

By the beginning of 2012, Vachino arrived to Mexico from Argentina, trying to put in practice the experience acquired in his native country as well as in Brazil.

“Along with the responsibility, it is an honour to be playing here in a confederation like NORCECA, and also an Olympic qualifier is an honour that not everyone, athlete or coach can achieve. I try to live this with joy and keep on learning because you can never stop doing that,” Vachino said.

Last, but not least, with Trinidad & Tobago there is a before and after in the history of women’s volleyball since the arrival of Cruz, who has been a very important mentor for athletes who have achieved the goal of playing in the European Leagues.

Players like Kelly Anne Billingy (who plays in France) as well as Sinead Jack and Channon Thompson, who both play at the Bialystock Club in Poland, have become the new stars. However they were not able to play in the NORCECA Olympic qualifier.

“Maybe we are not complete at this process since we have three players missing, but the girls have grown a lot in the recent years, sometimes we struggle for not having the courts or training facilities,” Cruz, who has become a respected personality in Trinidad sport, said.

None the less, Cruz feels proud of being in front of a “very talented and disciplined team that goes to competitions with the only goal of improving.”

The proof is the case of captain Krystle Esdelle, who is playing at the qualifier in Tijuana, whilst also being an iconic player at the Schweriner SC, in the German Bundesliga.

Federico Pereyra for WoV – “I will...