The win lifted Argentina to a 2-0 win/loss record in the competition while Japan fell to 0-2. Facundo Conte and Luciano De Cecco played key roles for Argentina in the victory. De Cecco was named the most impressive player of the match while Tatsuya Fukuzawa and Kunihiro Shimizu were the most influential players for Japan. Japan rallied to take the second and third sets after losing the first, but ran out of gas down the stretch. 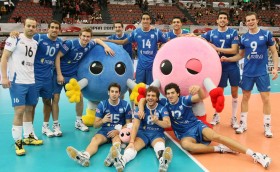 Argentina scored a second win tonight in Nagoya by coming out on top of a tough match with the home heroes of Japan, FIVB

Japan lost its opening match to Iran on Sunday, while Argentina defeated Serbia. Sebastian Sole opened the match with a nice block for Argentina. Japan came out energized and jumped to a 5-2 lead on a spike by Daisuke Usami. Federico Pereyra made a nice dink to cut Argentina’s deficit to 6-3 before Japan led 8-5 at the first TTO. Tatsuya Fukuzawa drilled a cross-court spike to put Japan up 10-6. Argentina moved within 13-12 before Conte sent a serve too long. The South Americans equalized at 14-14 on a receiving error by Japan and took the lead 15-14 on another mistake by the hosts. Argentina led 16-15 at the second TTO.

Conte soared for a spike to put Argentina up 20-17. With Argentina ahead 23-20, De Cecco put a serve into the net. Conte responded with a spike, however, to give Argentina set point at 24-20. Japan fought off a pair of set points before Rodrigo Quiroga gave Argentina the set 25-22 with a spike. Fukuzawa had six points for Japan in the first set, while Facundo Conte paced Argentina with five.

Kota Yamamura put Japan ahead 6-5 with a service ace in the second set. A spike by Yuta Yoneyama gave Japan an 8-7 lead at the first TTO. Some excellent passing by Japan resulted in a Fukuzawa spike and a 12-10 edge. Japan took a 16-12 lead into the second TTO on another spike by Yoneyama. A spike that sailed out be De Cecco gave Japan a five-point lead
at 18-13. Japan was ahead 21-16 when Argentina called a timeout. Yoneyama sent a serve long for 23-19, but Japan held on and took the set 25-21. Fukuzawa and Yoneyama both had seven points in the second set.

Japan carried the momentum from the second set into the third and moved out to a 5-2 lead. Shimizu unleashed a spike to put Japan up 7-4 and Quiroga sailed a spike long as Japan led 8-4 at the second TTO. Another Shimizu spike made it 13-7 for Japan. Conte then made two mistakes on the same play, receiving poorly and then hitting into the net. Yamamura staked Japan to a 16-8 margin at the second TTO with quick spike off a nice pass. A Pereyra spike boosted Argentina’s lead to 12-4. Argentina continued to control the set and was up 16-8 at the second TTO. An Ishijima spike made it 17-10, but he sent the ensuing serve long as Argentina moved toward taking the set. Argentina closed it out 25-15.

The final set was tight, with Argentina going up 5-4 on a spike by Solé. Argentina was ahead 8-7 on a block by Quiroga at the TTO as both sides substituted frequently. A Conte spike made it 11-8 for the South Americans and Shimizu’s serve sailed way too far to put Argentina up 12-9. Conte soared to drill home a spike to give his team match point. A beautiful block by Quiroga at the net closed out the contest.