A tough Russian, who looked great against the Italians on Sunday, looked to keep rolling against China who wer ranked 10th coming into the FIVB World Cup. And roll on they did with a 25-18, 25-20, 25-18 victory on Monday evening at Kagoshima. 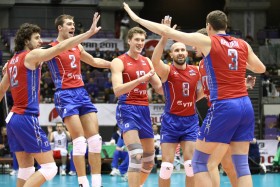 Russia take their second win in as many days, this time against China, FIVB

Russia were led by their big attacker Maxim Mikhaylov who posted a monster game with 17 points , including two blocks and four aces. China’s Chen Ping notched 13 for his squad in a losing effort.

Mikhaylov picked up where he left on on the previous day (he led with 19 on Sunday versus Italy), attacking well and throwing in a block on an attacking Zhong Weijun to go up 11-7. He followed with a blistering ace that nearly knocked over China’s libero Ren Qi. Denis Biriukov complemented with a trio of attacks (of his five in the set) to take a commanding 20-13 lead. And despite Chen countering well for China on the wing, Russia would take the first set on a hard drive from Roman Yakovlev off the bench.

Zhang Chen started China off on the right foot in the second with an incredible block on the behemoth Mikhaylov to go ahead by two, but Russia put together a mini 5-1 run that included three great attacks from Nikolay Apalikov to jump ahead 15-12. Dmitriy Muserskiy was playing well all around, with a block, a spike, a finally an ace his side take control 23-17. And with Li Runming and Chen colliding going for the same ball, their subsequent expressions of confusion summed up China’s misfortune on the day against Russia, who went on to take the set 25-20.

Russia brought the block in the third with Alexander Butko posting a pair on Zhang and Zhong, followed by another two stuffs by Muserskiy and Mikhaylov to jump ahead 10-6. Mikhaylov soon followed by throwing down back-to-back aces to go ahead six. While China showed some spirit late with more attacking from Chen and Geng Xin off the bench, Pavel Kruglov would close with a smash 25-18, taking the match 3-0.