The third competition day of the FIVB Volleyball Men’s World Cup provides intriguing battles that could play a major role on which teams earn 2012 Olympic Games qualifications berths during the 11-match tournament, 15-day tournament that runs through November 20 in various cities in Japan. 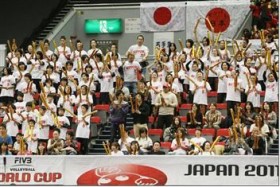 The fans have come to watch one of the deepest FIVB Volleyball Men’s World Cup tournament fields with first round action in Nagoya and Kagoshima, FIVB

Kagoshima has been the site of many key early matches in the 2011 FIVB World Cup, and the Brazil-Italy contest is no exception. Brazil, ranked No. 1 in the world by the FIVB and two-time defending FIVB World Cup champions, improved to 2-0 with a four-set win over No. 4 United States on Monday. Italy, ranked third in the FIVB world ranking, came back from an opening-day loss to Russia with a sweep of Egypt on Monday to even their record.

Italy’s Michal Lasko has scored a team-high 36 points for second-most in the tournament, but 26 of those came against Russia on the first day. Ivan Zaytsev and Cristian Savani have added 24 points each in the tournament. Brazil have enjoyed balanced scoring in the first two matches with Leandro Vissotto Neves leading the way with 28 points and Murilo Endres adding 26 points.

The Brazil-Italy series has produced many memorable moments in the previous 48 matches. Brazil hold a 29-19 record over Italy, including a four-set win in the most recent match during the 2010 FIVB World Championship semifinal match in Rome. Overall, Brazil have won the last 10 meetings since the 2003 FIVB World League. During that span, Brazil have defeated Italy in the 2004 Olympic Games gold-medal match, the 2008 Olympic Games semifinal round and the 2004 FIVB World League gold-medal match.

Nagoya will feature two unbeaten teams playing each other for the chance to go 3-0 to end the first round. Poland and Argentina are two of the four undefeated teams in the FIVB World Cup through the second day with victories. Poland have defeated Cuba and Serbia to start the tournament, while Argentina have defeated Serbia and Japan. Zbigniew Bartman is the main offensive weapon for Poland with 33 points, while Piotr Nowakski has added 27 points.

Argentina’s Facundo Conte paces his squad with 33 points as teammate Federico Pereyra as scored 25 points in the first two matches. Poland hold an 18-5 record against Argentina. The two teams last met during the 2011 FIVB World League bronze-medal match with Poland walking away with the 3-0 victory. Argentina won the first five matches in the series, but Poland have come out on the winning end in the last 18 contests.

Pool A at Nagoya

Iran and Serbia will face each other for the first time on Tuesday. Iran had their FIVB World Cup record fall to 1-1, after they lost to Cuba one day after defeating host Japan. Meanwhile, Serbia have lost to Argentina and Poland to open the tournament. Leading the scoring for Iran is Alireza Nadi and his 25 points, while Serbia’s Ivan Milijkovic has totaled 26 points in the first two days.

Cuba rallied from an opening day loss to Poland to top Iran in straight sets on Monday. Japan have now lost both their matches, but were so close to victory against Argentina on Monday evening but losing 15-13 in the fifth set. Fernando Hernandez has scored a tournament-leading 41 points for Cuba over the first two days. Japan’s Kunihiro Shimizu ranks fourth in the tournament in scoring with 34 points.

Cuba hold the upper hand in the all-time series against Japan with a 21-4 record. In the most recent meeting, Cuba topped Japan in three sets during the 2009 FIVB Grand Champions Cup, also held at Nagoya. The NORCECA squad has won the last 13 meetings since 1997.

Pool B at Kagoshima

Both Egypt and China will be looking for their first wins of the 2011 FIVB World Cup in a contest both teams feel are must-wins for the improvement of the squad. Egypt have opened the tournament with losses to No. 1 Brazil and No. 3 Italy to start the tournament, while China have dropped contests to No. 4 USA and No. 2 Russia. China and Egypt have played 13 times, and China has won 11 of those contests. Earlier this year, China defeated Egypt twice (3-0, 3-2) in the FIVB World League qualification tournament on July 31. While Egypt’s last official win in the series was during the 2008 FIVB World League, they did capture a 3-0 win in a friendly match held this past September in Dubai.

Russia will look to stay undefeated in the FIVB World Cup, while USA will look to get back in the win column following a four-set loss to Brazil on Monday. Russia’s Maxim Mikhaylov has scored 36 points for second-most in the first two matches of the tournament, while Matthew Anderson leads the USA in scoring through two days with 33 points. Russia have won the last three meetings, the latest match in the series being a four-set victory in the 2011 FIVB World League Final Round at Gdansk, Poland. Russia are now 29-13 against the Americans. USA defeated Russia in the 2008 Olympic Games, and since then have posted just one win (2010 FIVB World League) in seven matches.