Kagoshima, Japan, November 22, 2011 – Brazil’s Gilberto Godoy Filho (Giba) has accomplished nearly everything that an individual volleyball player can be in his time with his senior national team since 1997.

Gilberto Godoy Filho Giba has earned two Olympic Games medals, including a gold at the 2004 Olympic Games in which he was named Most Valuable Player and a silver medal at the 2008 Olympic Games. He possesses three consecutive FIVB World Championship gold medals from 2002, 2006 and 2010. Giba has helped his team dominate during the FIVB World League with eight titles since 2001. Brazil has also won back-to-back FIVB World Cup titles, in which the South American team is currently trying to defend in Japan. 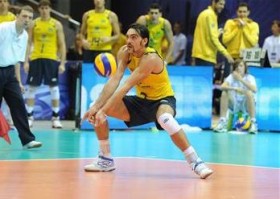 Gilberto Godoy Filho (Giba) is one of the most decorated volleyball players in the sport’s history but he continues to excel with different forms of motivation, FIVB

Giba, who was named an FIVB Hero this past summer, also has Most Valuable Player awards from the 2006 FIVB World Championship and 2007 FIVB World Cup. While Giba has gold medals from every major tournament, he continues to excel with new personal goals that account for more than medals around his neck.

“First, I play because I love volleyball,” Giba said. “Second, volleyball is the second sport in Brazil. I can help provide motivation for the kids in my country to play the sport. And third, it is a way to honor and defend my country.”

Three years ago Giba started a project for youth aged 6-14 to help keep them off the streets of Brazil and channeling them away from drugs and gangs through volleyball.

“I can be like a mirror image for the kids in what they can become,” Giba said in regards to his project. “My hope is that my project can help kids stay off the streets of Brazil by providing positive activities other than drugs and gangs.”

Brazil are currently one of four undefeated teams in the FIVB Volleyball Men’s World Cup after two days of competition in Japan. Giba, who serves as team captain, has scored 16 points as Brazil have defeated Egypt and world No. 4 United States.

Despite the fast start, Giba and Brazil are not taking any match for granted in the tournament as Olympic Games qualification is at stake.