Volleyball may sometimes turn into a family affair and this was already the case quite many times for two of the most popular Serbian – originally Yugoslav – volleyball glories, Vladimir and Nikola Grbic. 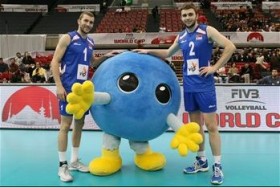 Nikola (left) and Uros Kovacevic pose next to the official mascot of the FIVB World Cup, FIVB

With Vladimir Grbic having already retired from competitive sport to pursue a political career – he is actively working for the Volleyball Federation of Serbia being one of its Vice Presidents – and Nikola Grbic having quit the Serbian volleyball national team after the 2010 World Championships in Italy, that tradition is now being extended with the contribution of the Kovacevic brothers, Nikola and Uros.

Yesterday, as 2011 European champions Serbia suffered their second defeat of the tournament in Nagoya Volleyball World Cup losing to Poland 3-1, quite significantly Nikola Kovacevic and Uros played together for a short while before the “baby” of the duo, Uros, replaced his brother Nikola for the final rush of set four. Uros Kovacevic is only 18 years old but stands out as one of the most promising volleyball players out there after he chiefly contributed to the success of Serbia’s youth national team that was crowned European and world champion this year, with Kovacevic junior being voted MVP in both tournaments.

While Uros was retained for the roster of the senior national team already last year as Serbia was gradually rejuvenating the group, Nikola – who is 4 cm shorter and 12 kilos lighter than his “baby brother” – delivered a very strong performance along the way to European gold this past September in Vienna, finishing as “best receiver” of the competition.

Uros and Nikola got together once again as the national team started preparing for the World Cup as they are normally going separate ways, with Uros – who is left-handed – currently spending his second season in Slovenia for ACH Volley LJUBLJANA, while Nikola has left Italy to try out a Russian adventure with an up-and-coming club based in Nizhny Novgorod.

Italy’s golden sisters Lucia and Caterina Bosetti finished their campaign in Japan last week on top of the standings booking their ticket for the 2012 Olympics in London but this time it won’t be easy for the Kovacevic brothers to repeat that feat as their side could not take home any points after the first two rounds of play. “The team has traveled to Japan only a couple of days before the start of the tournament” says a Serbian source, “and the guys had not yet recovered from the jet lag as they played their first match with Argentina”.

Tuseday’s game with Asian champions Iran is likely to be – one way or the other – the turning point for the Serbian campaign and also for the fulfillment of the Olympic dream shared by Nikola and Uros.

Austria: Victory and defeat for the two...